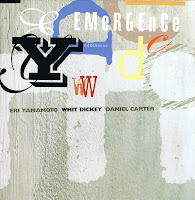 Whit Dickey, who is best known for his collaborations with David S. Ware, is not only a great drummer, the four CDs that I have of him as a leader all rank with four stars (in my obsessive personal bookkeeping system). His music is free and creative, while keeping this soulful edge that is so typical of David S. Ware, but also of Daniel Carter, who plays sax, trumpet and flute on this album. The trio is completed by Eri Yamamoto, who is in essence more post-boppish than free (if these categories mean anything), yet her more structured and at times impressionistic style form the perfect complement for Carter's exuberant and spiritual soloing and Dickey's measured polyrhythms. The trio drags you into their quite accessible but beautiful tonal world, aptly starting with a long drums intro, followed by introspective piano, and beautiful trumpet-playing. The pieces on the album range from the slow eery "Mobile", with sparse drumming and measured piano keys supporting Carter on flute, to the pounding "Last Taste", on which tenor, piano and drums engage in a fierce collision of earthly forces, leading to spiritual eruptions. The album ends with the most intimistic and romantic improvisation, led by Yamamoto's piano, and on which Carter softens in an unusual way, moving into more traditional playing, yet keeping this dancing spirit of freedom. Even if Dickey is a great drummer, his real power is again illustrated by this beautiful album: to him it is all about the music. What a great trio! I hope they will release more albums.

Watch their performance on this year's Vision Festival