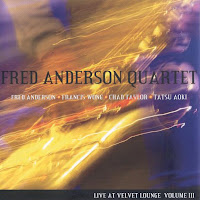 From the very first notes of the solo sax intro, you recognize Fred Anderson's tone, phrasing, rhythm but also his passion and soul, right there in front of you. Nothing new, but as always a delight. No bad word about the old master, and when his band joins in the festivities, the audience cheers loudly and enthusiastically, and rightly so. With Francis Wong on sax, Chad Taylor on drums and Tatsu Aoki on bass. The latter two have figured on many of Anderson's records, but of his 20-odd albums, it's only the third one with another saxophonist, Kidd Jordan and Ken Vandermark being the other two.

As you can expect, the music brings the usual lengthy yet focused improvisations over a polyrhytmic drums and repetitive bass vamp. If you don't move on his music, you must be made of stone. And if you're not moved by his music, same thing. Yet at the same time, because of the length and the repetition, and the interlocking saxes, weaving great textures, moving towards each other, away from each other, echoing, challenging, the end result is quite hypnotic and spiritual too. While at the same time open to fun and self-relativation. A rare combination. So even if you think like me, that you must have heard many of it  somewhere before on one of Anderson's albums - but which one? - it's a pointless thought, because the music is just great. It was great then, it is great now. Body, heart and soul. Pure joy!