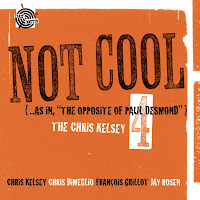 Jazz critic and saxophonist Chris Kelsey now releases his new album under his own name after having published several on CIMP in the past, with "The Crookedest Straight Line, Vol. 2" being his latest. The band plays very much in the same vein as on the previous releases, finding a great balance between composed themes and furious and intense improvisations. Except for Chris Dimeglio, who replaces John Carlson on trumpet, the band is the same, with François Grillot on bass and Jay Rosen on drums.The line-up is not by coincidence the same as the original Ornette Coleman Quartet, and stylistically there are also ressemblances, albeit in a more modern version.

In a very unusual attitude, Kelsey positions his music against the stylistic straightjacket of mainstream jazz, illustrated by Paul Desmond. His liner notes offer a quite long explanation for this, summarised in "I couldn’t embrace the music I loved without repudiating what I found appalling", a kind of rebellious attitude vis-à-vis the context of his own youth in the sixties. You can read all this in the liner yourself, as they're part of the free download package.

The music itself his excellent without breaking boundaries. Kelsey's compositions are angular in the Coleman tradition, with highly rhythmic melodic themes, as lead-ins for free improvisations. In contrast to much of today's free jazz, the rhythmic backbone remains the anchorpoint during the improv. Even in the slower pieces, as in "Raw Sun", the music is intense and quite dense, with the various instruments being active most of the time, interweaving sounds and giving perspective to each other's improvisation. The only voice to get real solo moments - as in the only instrument playing - is Grillot's bass, which offers some breathing space to the horn players and to the listener on several tracks. The slow "The Past Is A Frightening Prospect" is the best piece of the album, together with the last track, a long rendition of Albert Ayler's "Ghosts". Like Ayler, this music is expressive, intense, iconoclastic, and paradoxically also reverent, and with quite some emotional power.

You can temporarily download for free on Chris Kelsey's blog (128 kbps).