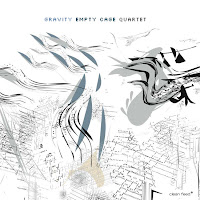 The Empty Cage Quartet keeps releasing quality albums year after year. The band consists of Jason Mears on alto and clarinet, Kris Tiner on trumpet, Ivan Johnson on bass and Paul Kikuchi on drums, and has been performing for many years in the same line-up. This is without a doubt their most mature statement to date, with a self-assured delivery that goes beyond the common expectations about jazz. The band's compositions are based on numeric concepts : "Calendric number sequences generate cyclical Tzolkien forms that combine and recombine, seeking an intuitive, organic union of numerological complexity and visceral groove". That's how Kris Tiner describes it in the liner notes, adding "We are not conceptualists". And he is right. What counts is how the music sounds. All the rest are just methods to create new approaches, to open doors as yet unopened, to create new insights, to challenge existing patterns and notions. And that's what this band does, creating layers of music around the core structures, improvising and expanding, delving into the new possibilities that are offered. The overall result is strong. Needs to be heard. Hence here a sound bite from "Gravity 1" :
Gravity No. 1: Section 4 by kristiner

The downside of it is that it lacks the emotional drive and expressivity of the previous albums, as if the one goes at the expense of the other. Even if the approach is interesting, the intellectualisation of the music creates a little more distance with the listener. In that sense, their previous album "Stratostrophic" was stronger. But again, if you like the band, this is for sure one of their best so far. And don't get me wrong : there is plenty of emtional delivery, yet it's a little less of a strength. Infusing their new concepts with the sustained emotional power of some of their previous albums would work miracles.