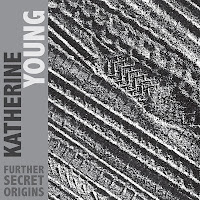 A while ago I heard bassoonist Katherine Young's "Things Suspended Converge And Fall", a composition for 19 musicians that she released last year, of which, I must admit, much went straight over my head, and that is available for free download.

Now she just released her first solo bassoon album on Porter, and it is one that goes straight to my heart. On the first track, the aptly called "Terra Incognita" (unknown territory), the spacious sound of a fog horn invites you into a sonic world that you haven't heard before, with several overdubs but also with a kind of irregular heartbeat to accompany the playing. On the second track, called "Patricia Highsmith", ambient sounds such as screeching car tyres and police sirens illustrate the suspense of the author's novels. And over these, the howling, wailing, rhythmic pulse of the bassoon weaves great sounds, often exploring timbral possibilities, resulting in the kind of drone effect that saxophonists get with the circular breathing technique. On "Elevation", the subtle multiphonics create a very sensitive, vulnerable, almost yearning tone, over the continuing heartbeat produced by releasing the tongue from the reeds, an interesting technique which she uses almost throughout, including on "For Astronauts, For Travelers", the longest piece which is also the highlight of the album, a slow, calm, restraint but very intense piece, with an incredible sense of pace.

She does not feel the need to fill space, it almost comes organically, determined by the sounds and the instrument itself. After the long drones around fixed tonal centers, "Some People Say That She Doesn't Exist" adds some melody to it, overdubbing several recordings, acting as a small ensemble, almost classical in sound. The album closes with the raw deep sounds it started with, on a track called "Orbis Tertius", possibly a reference the "unknown country" or "a to-be-created world" in the story by Jose Luis Borges.The circle is closed.

Despite its unfamiliar approach, and relative inaccessibility, it is equally appealing and welcoming, and very hypnotic. Strong solo performance!