Good music is a strange thing. It sticks to your bones at first listening, makes your blood rush faster through your veins, give you goosebumps and like an addict, you want to listen to it, time and time again. And it is all very subjective. What I like, will not necessarily be your thing, and vice versa. And that is good. Luckily.

Next to my list of best albums of the year, I also decided to dedicate some time to a new feature : "The Musicians Of The Year", another topic we can question and argue about. 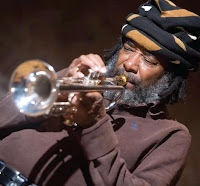 With two five-star albums (and one which I liked less), he is in the top of my rankings. Some call him a Miles Davis epigone. He is not. He is influenced by Miles, like possibly most modern trumpeters, and he even released a series of tribute albums to Miles, but he is a great musician in his own right, with a stellar technique, a musical vision that goes far beyond what Miles ever conceived, and with a spiritual dimension that was altogether lacking in Miles Davis' music.

Furthermore, he is uncompromising. He plays what he likes and he plays what he thinks he should be playing. He is a muscian true to himself. Listen to his duet with Jack DeJohnette, it is one of the best albums of the year, but so is his Spiritual Dimensions double CD, a release that also shows the different faces of the artist. Great.

After some decades of playing her sax, Danish saxophoinst Lotte Anker releases two albums with Craig Taborn and Gerald Cleaver that are absolutely stunning: "Live At The Loft" and "Floating Islands". True, she plays with two master musicians, but it is primarily her voice on the sax, her phrasing that determine the music. What she does is utterly creative, appealing to both heart and mind at the same time, without alienating listeners. With her trio, she redefines jazz, if you can still call it that.

Next to that, she also participates in this other genre-bending band, "Mokuto", that released a great album this year too, without forgetting last year's "Alien Huddle". 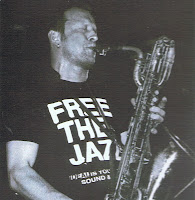 It's hard to keep count of the numbers of bands and albums the Swedish saxophonist plays with/on, but he's getting better and better still, and creating great music in many directions. A restless soul, never satisfied with his achievements, he keeps looking for new things, .... and he finds them. This year, he releases two albums with get a five-star rating, one solo album, one duet with Barry Guy. On both albums, the saxophonist demonstrates that his instrument has become part of his body. Any emotion you have (he has) gets amplified, reinforced through his instrument: directly, immediately and raw, whether it's agony, distress, sadness, and everything in between. Next to an uncompromising Lithuanian quartet release, he also presented his new band "Fire!" he brings jazz into rock music, and again with great success. And on Qbico, he releases "Mats G. Plays Albert A.", a 20-minute reverent vinyl tribute to Ayler pressed in 100 copies only (thanks Tony!), from which the above picture is taken. His implicit message to young musicians is clear : it may take a long time of searching, but finding new musical vistas is possible, and artistically so rewarding.

The great lady of the bass released many albums this year (six if I'm not mistaken). As I wrote earlier, she is a musical nomad, playing with like-minded adventurous spirits, whether it's with the experienced William Parker, or young Quentin Sirjacq, opening her ears and mind for the interaction, and going deep into musical and emotional layers, going to the essence, which makes every performance unique in approach yet musically also universal at the same time.

Tony Malaby should be in.

The link to Lithuanian quartet is wrong. Both links refer to the Fire

greed on Wadada... his duet with Jack DeJ made it to my Top list of the year. It totally caught me off guard (I had some of WLS's earlier stuff, but none of them really jumped out at me)... great stuff...

Thanks Anonymous, I corrected it.
stef

I'll be argumentative and say this was John Butcher's year,but as a proud American,I'm glad you chose Leo S