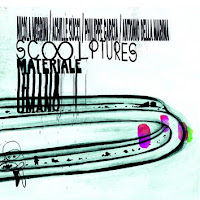 A new band, announced by the label as "Can't be ignored", which is quite a negative way of putting it, but true enough, this is highly clever, highly creative and highly emotional music, a rare combination, but what is more: their take on music is something else: powerful and visionary.

The thirteen short pieces clock between two and seven minutes, and all refer to slices of the human body: "Brainslice", "Bellyslice", "Liverslice", etc. The music itself is described as "instantaneous composition, improvisation and live electronics, and the use of purposely programmed computer melt together in scenic writing". The computer records "not accidental but unforeseeable", in the sense that the repetitive elements conjured up by the system do not always follow the same rhythmic cycle. Sometimes it does, sometimes it doesn't.

OK, whatever the technology behind it, the result is quite strong. All pieces have their own story, often compact, centered around a few core ideas, yet very focused and intense. Despite all the electronics, you need visionary artists and great instrumental skills to bring this to a good end, and with success. Bizarrely enough, because of the repetitions of the electronics, it all sounds carefully composed. Some pieces are fully colored by the electronics, other start from a solid jazz base, as on "Lungslice", others mix in Asian elements, as on "Nerveslice", with shakuhachi and arco bass. The highlight is without a doubt the haunting "Lostslice", wich includes high-toned worldless singing in combination with bass clarinet. I thought those were female voices, but it's the musicians themselves:  weird and brilliant. Not everything works though, or would fall within my broad level of appreciation, but that's because they take risks, and without risks, no new musical vistas, which you get here in spades.