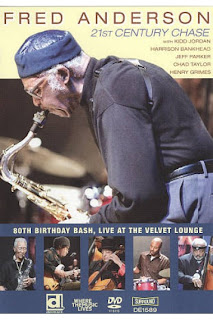 I am a Fred Anderson fan.

And even if his approach hasn't changed much in the last decade, everything he does is an absolute pleasure to hear. Anderson is joined by Kidd Jordan on sax, and the younger rhythm section of Jeff Parker on guitar, Harrison Bankhead on bass, and Chad Taylor on drums, or the crême-de-la-crême of Chicago AACM jazz. This is a "tenor battle" in the most traditional sense, and the liner notes refer to the original "Chase" by Dexter Gordon and Wardell Gray from 1947, hence the title of this DVD and CD, which is a tribute for Anderson's 80th birthday.

Anderson and Jordan have played a lot together before, but I think that their "Two Days In April" (Eremite), released exactly ten years ago, was their only recorded performance. Parker, Bankhead and Taylor have appeared with Anderson on numerous records, and an even huger number of concerts. And you can hear that in the fine interplay that you get here, both in the fierce moments as in the slower ones, and especially in the transitions from one to the other. Anderson and Jordan are indeed a great front line, and they do not really "combat" as in the original chase concept, as much as create multilayered soloing. Anderson and Jordan are easy to distinguish (yes, also on the CD). The former has this typical rhythmic phrasing that he's been perfecting over the years, with a deep and warm tone, the latter has a great sense of lyricism and timbral sensitivity in the higher regions. Both have this unrelenting power, full of soul and passion, and empathy towards each other. And they find each other so easily during the solos, joining for some unison phrases, then playing in counterpoint, or with an octave interval, full of musical joy, real soulmates. And all the band members join in the fun and the music. Taylor is excellent throughout, Bankhead leads the dance with his arco on the slow second track, Parker gets the lead spot on the third track, dedicated to Alvin Fielder,  ... but regardless of how it starts, it always ends in a great free bop piece, to the great enjoyment of the audience. The DVD has a bonus track, starring Henry Grimes, who gets the piece's intro for another piece that vaguely ressembles some of the former, but really, who cares ....

The only thing I can add, is that Anderson's attitude to music, his relentless practicing, his absolute passion (including his courage to re-start his Velvet Lounge a few blocks away from his original bar), his fire and his humble nature all shine through in his music.

The man's got soul.

Watch the promo trailer for the DVD

Fred is the best. Octogenarians like Fred, Sam Rivers, or Cecil Taylor are inspiring in the resilience they've shown over the years - and the fact that they still have more fire in their playing than most 20 years olds!