Jason Stein is a bass clarinetist. He plays no other instrument. This gives him the opportunity to focus his skills, and with great success.

Jason Stein is a musician. He records to make music, not to demonstrate his technical skills. 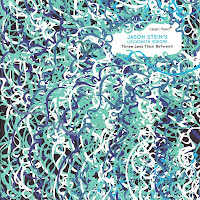 After "The Calcululs Of Loss", this is the second release by the trio, now with Jason Roebke on bass, and still with Mike Pride on drums. The album consists of eleven compositions by Stein, covering lots of ground, using the entire jazz catalogue to bring his music, that is free and exploratory in nature, yet swings, bops and sings at the same time.The switch of cello to bass gives the compositions a totally different color, with the bass a better complement to the bass clarinet because of their low sound companionship, and a better complement for the drums because of their comparative power and drive. Despite the lower sound registers, Stein is a master in seeking contrast too. He can play high sensitive notes, whether in overtones or straight, as he does on "Stevenesque", the second track, which is very airy and open-textured, as is the sensitive "Most Likely Illiterate". Other pieces, in contrast, such as "Izn't Your Paper Clip" bring quite dense, nervous agitation, propulsed forward by the excellent rhythm section. "Saved By A Straw", and the title track, are pure avant-garde sound exploration by the trio. But then you get some real boppish pieces like "Protection And Provocation", or "Amy Music" (see clip below), on which the legacy of Dolphy shines through. You get the picture, a rich, varied, warm and exploratory album. 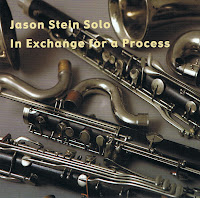 Playing solo is the absolute art of creativity and inventiveness or the perfect recipe for absolute boredom. It is like the ultimate exercise any musician should try to accomplish, not only with his instrument or his own restraints and possibilities in mind, but also taking the listener into consideration. Pushing the envelope. Going beyond the borders of your own creative limitations. Jason Stein manages to be captivating while exploring his instrument and doing something meaninful musically. It is also a physical exercise. You can hear him breathe, squeeze out the last note of a phrase, get multiphonics out of his reed, play around with timbral explorations. All that's fine, but it also makes for a great listen: the sensitivity, the lyricism, the internal dialogues, the joy of playing, the sad quality of sounds, the distress, it is all here, .... just for you to enjoy.

Listen to an extract.

Here are some other solo bass clarinet albums

And some with not exclusively bass clarinet

Evan Ziporyn - This Is Not A Clarinet (Cantaloupe, 2001)
Ned Rothenberg - The Lumina Recordings (Tzadik, 2006)

Other suggestions are welcome!

Which album would I recommend? Truth be told, I love the naked power and vulnerability of the solo album. The trio album is surely more accessible. Both are really good.


Both albums are available from Instantjazz.