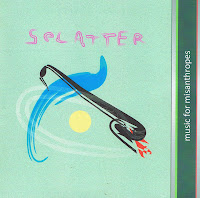 Let's get rid of a couple of possible misunderstandings first.
The band is Anna Kaluza on alto, Noel Taylor on clarinet, Raúl Monsalve on electric bass and Pharoah S Russell on drums. And they're British. At least partly: Kaluza is German and Monsalve from Venezuela.

The music is sweet, gentle and accessible, free and quite mature, in contrast to the adolescent scribblings on the back cover. And entirely improvised. And I must say, well improvised. The lyricism and interplay on some pieces make it sound as if it's thoroughly rehearsed or at least pre-conceived, but apparently not. The bass guitar of Monsalve is one of the most distinguishable and defining factors of the music. He gives color, punch and rhythm, allowing for the double reed front line to interlock phrases and melodies, and giving the excellent drummer the opportunity to play on or around the beat at leasure. Both Kaluza and Taylor are really good and creative, not trying to imitate, but making their own sound. It all sounds young, crisp, fresh, modern, with rock-influences of course, and with vision and coherence. They give the Claudia Quintet as possible reference, and in terms of sound there are indeed analogies, but not conceptually. Chris Speed and Jim Black are somewhat better for comparison, albeit a little more free.

And misanthropes? Not at all. They have a sensitivity and emotional content that is too gentle.

A really strong and enjoyable debut.

Listen and download or buy from CDBaby or iTunes.