Sometimes you wish that German saxophonist Peter Brötzmann would do something else that what he's been doing for the last fourty years, namely to blow his lungs out in his horn, occupying musical space and then not let go of it for the rest of the performance.

Sometimes you wish that German saxophonist Peter Brötzmann would NOT do anything else than what he's been doing for the last fourty years, not only because that's what he does best, but because doing other stuff clearly brings him out of his comfort zone. 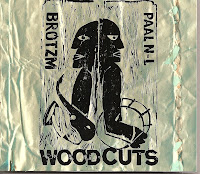 This is without a doubt the best album of the lot: fierce and relentless power play between two masters. Paal Nilssen-Love has played many times with the saxophonist, including a duo recording, "SweetSweat". It works best because Brötzmann does not have to care about other sounds intermingling with his own, he just needs the percussive power to drive him forward, and whatever he does, can move and shout and scream without hitting the borders of other melodic musicans. The result is fireworks from beginning to end. True, there a few seconds that the avalanche of punches and kicks and jabs slows down a little, but these are far and few between. Even on the eighteen minute long fourth track the fire does not die down for one millisecond. And when you think he's reached his climax, he goes even harder and higher. Not for sentimentalists, but a delight for the fans. 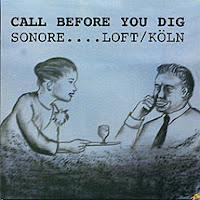 Sonore is Ken Vandermark, Mats Gustafsson and Peter Brötzmann, the three power players of current jazz for their third album in this configuration, now with a double CD, with 7 tracks on the first, and no less than 17 tracks on the second CD. The interesting concept is that, without the presence of a rhythm section, they move into a more melodious and lyrical mode, giving each other ample space at times, or adding a double backbone to the soloist. "Mountains Of Love" on the first CD is an absolute beauty, with sensitivity that will move you to tears and sudden blasts that will blow off your chair (at least it did to me). Next to sax, Brötzmann and Vandermark also play their bass clarinets, and Gustafsson his flutophone (a flute with a sax mouthpiece). In their trialogue they explore not only all the timbral possibilities of their instruments, but also the comfortable shifts in improvisation provided by this unique line-up: lengthy single tone developments offer solid background for improvisation, but trio is also duo + one, evolving into one + duo, merging into trio and dissociating again. A pleasure for improvisors. The album offers much : from subtlety to utter cacophony. 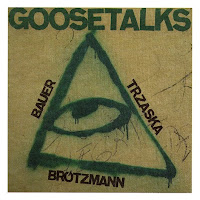 We find Brötzmann back with Mikołaj Trzaska, a Polish saxophonist who is in my eyes the antipode of the German, because of his sophisticated warm tone and melodious phrasing, and with Johannes Bauer on trombone to complete the trio. The album's title is quite well chosen, because that's exactly how it sounds on the title track: geese chatting full of excitement and enthusiasm. The long second track is more fluent, called "Ducks Call", and the contrast in physical power between the German and the Polish sax-player becomes all too apparent, although they do find each other in the content of what they're doing, mostly in short bursts of sounds, with the exception of the last track, an ode to Albert Ayler, that starts with a two minute solo intro by Brötzmann, full of raw power, and then listen how emotionally more subtle Trzaska joins, again the perfect complement for the German's tone, with Bauder's warm trombone lifting the whole piece up where it belongs, in the free sky, with Albert Ayler, the ducks and the geese. 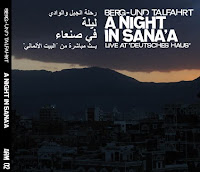 Interestingly enough, Brötzmann some years ago expressed his interest in playing with Arabic musicians, which he now finally does with this classical band from Sana'a, Yemen. The ban is Abdul-Aziz Mokrid on violin, Khalid Barkosch on cello, Achmed Al-Khalidy on kanun, Ali Saleh on ney, and Yasir Al-Absi on darbuka. The band is further completed with Michael Zerang on drums, who himself happens to be of Iraqi descent.

The first piece starts with the Yemenite band playing their classical Arabic music, accompanied by Zerang, with its typical sophisticated sad and spiritual tone, marked rhythmic unison lines, and long improvisations. When Brötzmann joins after six minutes, it sounds like the building is being invaded by godzilla in person, yet the terrified band keeps playing, and they are right, because godzilla apparently retreats so that they can bring their music to its expected finale.

To be honest : it just doesn't fit. Brötzmann lacks the skills to find common ground with the band from Yemen, nor do they seem particularly open to what the German does. Brötzmann's compositions are too bland, as compared to the opening and closing track. There are many other examples where traditional arabic music and jazz work very well, but not here. Brötzmann's endeavor to follow the melody on the second track is almost painful (as on the other pieces), yet it does work when he completely ignores the tune, and does his own thing just on top of it. Believe me : that works, and after a while there are even some great moments of powerful contrast.