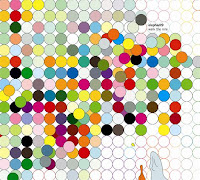 Two years ago, the Norwegian tio Elephant9 released its first album, "Dodovoodoo", which was praised here for its forward thinking and energy level. On their sophomore album, Ståle Storløkken on fender rhodes, hammond organ, and synth, Nikolai Hængsle Eilertsen on bass and electric guitar, and Torstein Lofthus on drums, keep the same recipe, but drive up the speed, the intensity and the complexity.  Whereas on the first album, the MMW references seemed appropriate, I think they go a lot beyond MMW now.

Think of an instrumental concoction of King Crimson's inventiveness with Deep Purple's Jon Lord bombast, and some avant-punk attitude ... and then a step further.

It is magnificent, but it isn't jazz.

The stuff of them you find on Youtube is pale compared to the music on this album, hence no clips.