While more snow is falling than most of us would want, the economic and social world is coming to a halt, icy chill is kept outside, night has fallen, and everything has turned to calm.

Then two albums are released, both almost simultaneously, miraculously similar, yet different. All ice and warmth, all vocals and percussion, both avant-garde folk. Unique, but apparently not. 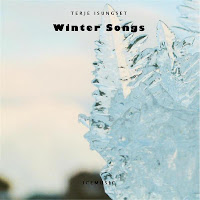 I have reviewed Norwegian percussionist Terje Isungset's music before, and I must say that the "ice man" keeps delving deeper in his icy environment, turning it into a warm and welcoming place, where man and nature are in perfect harmony, despite the inhospitable conditions. The band consists of Nils Økland on fiddle, Sissel Walstad on harp, Espen Jørgensen on guitar, and Lena Nymark on vocals, with the boy choir of St. Hallvardguttene assisting. The percussion and the vocals are the most remarkable aspect of this music. Isungset carved out his own kind of approach, very traditional and based on folk music, but serene, beautiful and open-minded. True, musically he keeps repeating himself, but who cares? To have created such a very unique musical space, is just a dream for many musicians. 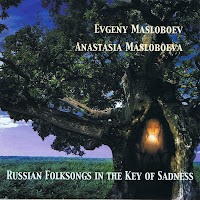 In the same vein, this new (soon to be released) and wonderful album by Evgeny Masloboev and his seventeen-year old daughter Anastasia bring an equally heart-warming, but then Siberian, album of voice and percussion. Evgeny plays drums, chang, santur, cymbals, piano, block-flutes, vibes, vargan, violin, acoustic bass, kitchen utensils, enamelled pots, marimba, industrial garbage, pieces of metal and an SPD-S Roland. All music is composed by Evgeny Masloboev, but based on traditional Siberian music. The overview of instruments he plays give you an idea of the uniqueness of the sounds you will hear, a weirdness that is equalled by the variety in rhythms and overdubs, yet as welcoming and inviting as the voice of Anastasia, whose singing remains pure and unperturbed by the clatter, ruckus and rebellious tension that is accompanying her at times. Like Isungset's, his music is tribal, yet pushed directly into an avant-garde context, full of countercurrents and unexpected turns, rich in instrumental try-outs and combinations, not afraid of a little mellowness and even bordering on kitsch at times, while still remaining accessible with regard to melody and harmony. In contrast to Isungset's music, Masloboev's compositions are anything but linear, starting somewhere, moving into different regions, rhythms and sonic textures as the piece evolves, and all this assembled in the studio with different pieces of recordings.

Jazz fans, bear with me: it is snowing outside, it is bone-chilling cold, all is calm, and yes, this is not jazz in the strictest sense, but at moments like this one, anything heartwarming is welcome.

Thanks Svenn! I will integrate this information in my review.