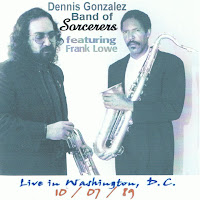 Dalles trumpeter Dennis González describes in the liner notes how a cassette tape of this unique performance that took place in Washington on 7 October 1989, suddenly turned up, and, even if the sound quality is "rough and raw", and even "though the music is cut off in the middle of bassist Carter Mitchell's solo", it was still worth releasing in honor of the late tenor saxophonist Frank Lowe. González was at that time trying to set up his American "Sorcerers" quartet, in analogy with his European band. Reggie Nicholson plays drums, and Wilber Morris would have been the bass player on this gig, but he fell ill and had to be replaced by Mitchell at the last minute. Anyhow, this is free bop in the best tradition: rhythmic, fierce, expansive, spiritual, lyrical, more in the Coltrane than in the Coleman tradition, but indeed, I can only agree with González: this is a great find. Lowe is excellent, but so are González, Mitchell and Nicholson. Nice!