You Had Me At Hello

"You Had Me At Hello" is a phrase from the movie Jerry Maguire, with Tom Cruise and Renée Zellweger, it is also a new sax trio with Alexandra Grimal on tenor sax, Adrian Myhr on bass and Christian Skjødt on drums. This French-Norwegian-Danish trio met at the Banff Centre of Arts in the Canadian Rocky Mountains, and they connected musically on the spot, sold to each other from the first "hello". Their first recordings are out now, on two 7" vinyl singles, released in 500 copies only, a pretty unique concept.

I must say, Alexandra Grimal is a saxophonist to follow, whether with her own trio, or with this band, she comes up with new ideas and powerful playing. 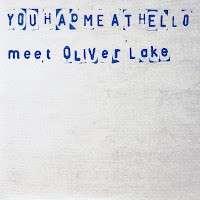 The first single brings You Had Me At Hello with alto saxophonist Oliver Lake. Grimal comes in strongly from the very early notes, immediately followed by the rhythm section, in a strong free jazz vein, without apparent structure but soulful and intense, preparing the ground for Lake's floating and fluent alto phrases, a little bit in the distance but powerful.The other side is more melodic and lyrical, less powerful but more hypnotic, with Lake playing a more dominant role. 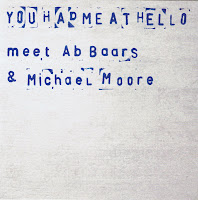 The second single has Dutch clarinetist Ab Baars and American (but in the meantime half-Dutch) Michael Moore also on clarinet and alto sax. The music is equally open in its possibilities, but somewhat more abstract and eery. The fact that the sax and the two clarinets float and dance around each other makes it also an interesting play with layers of sound.

Both singles are easy to recommend, but possibly harder to get, and even less easy to play: who is still used to change the sides of a single after a couple of minutes?