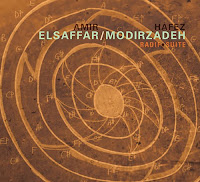 Amir ElSaffar is an Iraqi trumpeter, here joining forces with Iranian saxophonist Hafez Modirzadey, assisted by the great rhythm section of Mark Dresser on bass and Alex Cline on drums. In contrast to both ElSaffar's and Modirzadeh's previous albums, it would be hard to call this "world jazz". "Radif Suite" is jazz in every aspect of the music, while at the same time opening new melodic and rhythmic possibilities of the Arabic and Persian music, but it's not a fusion, or even a blending of genres, as on El Saffar's previous album "Two Rivers", or Modirzadeh's "People's Blues", two albums that are easy to recommend. The two real exceptions to that comment are ElSaffar's "Awj/Ancestral Memory", which is a partly sung in Arabic, full of spirituality, with the sax and trumpet taking over, with the same strong microtonal inflections, and the closing track "All Said And Done".

The album is built around two suites, the first, “Radif-e Kayhan” written by Modirzadeh, and the second, “Copper Suite”, by ElSaffar.

Especially in Modirzadeh's writing, you can hear Monk, Ornette Coleman, and the blues, all this with a quite open rhythmic structure, with once in a while maybe too strong emphases, or tracks leading to somewhat predictable (and not really relevant) themes. ElSaffar's compositions are even more open, more built around texture and sound than theme and structure, with the exception of the more boppish "Bird Of Prey". Both musicians are also excellent instrumentalists, demonstrating the power of pushing their horns beyond the traditional jazz sounds.

Read more and listen to excerpts on Pi Recordings.