Saxophonist Dave Liebman is an absolute sax virtuoso, but his stylistic range is so wide, and his musical appetites so broad, that you never know what you get when you buy his albums : the music can be mellow and bland, new-agey superficial, yet equally creative or adventurous. 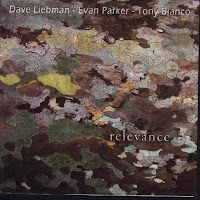 Dave Liebman explains in the liner notes that he has a wish list of musicians he wants to perform with, and that Evan Parker was on top of that list. Drummer Tony Bianco managed to arrange a gig. The three met, and without further ado hit the stage for a fully improvised concert, resulting in this fantastic album. The first piece starts as a "tenor battle" in the best tradition, a real blow fest in which the two hornsmen meet and greet, challenge and respond, push forward and push forward, relentlessly supported by Bianco's nervous and thundering drumming, and when you think they will calm down a bit, the exact opposite happens: tension increases, energy levels are raised, with each one stepping back for a few minutes to let the other play solo a little, but then they lock horns again, and yes, they do calm down, giving Bianco some space, but that is of course only until the storm breaks loose again.

The second piece starts calm and meditatively, with the two saxes easily finding a common language and tone, but then halfway the piece Bianco seems tired of their musings and increases the tempo, and the intensity of the sax dialogue, which continues to evolve in the best traditions of the "Tenor Madness" album by Sonny Rollins with John Coltrane that Liebman refers to in the liner notes, with the only difference, that what Liebman and Parker get out of their saxes was not only inconceivable in 1957, but it surely must sound as real madness to the two jazz legends. The last track starts with drum rumbling and bamboo flute, then Parker takes over on sax, for some shamanistic yet sensitive playing.

Even if these two virtuosi have never played together, the ease with which they find common ground, in every respect, is stunning. So is the music. Fierce, energetic and surprisingly warm. 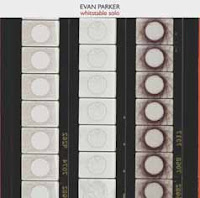 Evan Parker solo is of course something else. From the very first piece, he takes a deep dive into intense multiphonics and endless circular breathing, filling the entire St. Peter's Church in Whitstable, and using its resonant power to the full, not only a technical but also a physical tour-de-force, keeping it up for close to ten minutes, trancelike, hypnotic, stunning. The second piece continues in the same vein, even pushing the envelope, giving the impression that at least three saxes are playing, one in the higher and one in the lower register, playing in counterpoint with the core phrase. On the third track, the hypnotic drive and effect make room for more measured abstract lyricism, and continued on the fourth piece, again with the magnificent sonic space of the church adding a dimension to Parker's performance. You get the gist. The last track is fifteen minutes long, and has a name, "Alpha And Omega", the beginning and the end, and it sounds like that. Giving it all, full of energy and sophisticated nuance, Evan Parker again demonstrates what a great artist he is, creating universes out of a brass tube. 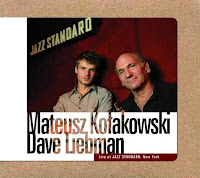 Mateusz Kołakowski is a young Polish pianist, who played this nice series of duets with Dave Liebman, at the Jazz Standard in the US.The pieces vary between the impressionistic and the bluesy, with the latter style dominating, with a strong rhythmic pulse from the piano offering Liebman a great backbone to improvise. Both Kołakowski and Liebman deliver a nice performance, but without being adventurous. A very enjoyable album.

The Dave Liebman, Evan Parker, Tony Bianco CD looks very interesting. You seem to be very enthusiastic, I'm surprised you didn't give it 5 stars after such a review?!

Well, that's always a tough choice. I was actually thinking about it, then I didn't ...

No problem, makes it an even more of a tempting listen!

I think the record label is called Red Toucan. They have some great cd's.

You're right. It's Red Toucan. A little too fast again.