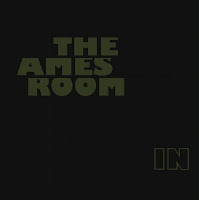 The Ames Room is French altoist Jean-Luc Guionnet with Austrialians Clayton Thomas on bass and Will Guthrie on drums. This album is without a doubt one of the most intense you will hear, with Guionnet setting up the pace and sound from the start and then not letting go at all, despite the numerous variations within the very strict boundaries in which their cry of freedom erupts. This album is indeed one long shout, all in the same spirit : voluminous, expansive, full of drive and energy, relentless and raw, with a take-no-prisoners approach. The accompanying press kit speaks of "terror jazz", and the descriptor is not too far fetched.

The vinyl LP consists of two long improvisations. Side one was performed in Niort, France and Side two in Poznan, Poland, with a year's difference. Despite the difference of one year between both performances, it's clear that their voice is the same and both pieces fit well on the same album. The first side has a strange kind of collapse in the middle, with the audience shouting and the drums keeping the attention going, with Guionnet distancing himself from the mikes, and playing somewhere in the background, but apparently the same happens with bass and drums. It was not dust accumulating under the needle of my record-player, yet for a moment I thought it was. Gradually the bass, and then the drums drag the trio back into sonic clarity. Whatever it is, it shows the non-terror minimalism these guys are also capable of, and this more cautious playing offers an interesting contrast . Or maybe it is just a gimmick to illustrate the band's title, which refers to the optical illusion created by a carefully crafted room.The second piece is more in once voice, with powerplay from beginning to end, and a somewhat better sound quality.

It is not unique, it is not even boundary-shifting, but so much raw energy is by itself a pleasure to listen to.

Listen and buy from MonotypeRecords.

The sound quality on this video is far from good, but it illustrates the energy of the playing quite well.