Well, yes, here is some Braxton again. Prolific as ever, open-minded as ever, creative as ever, adventurous as ever, ranging from traditional quartet to pieces for his Ghost Trance Music (GTM), duets with vocals and sax, and a trio with sax and vocals. Only because of this album, "The Girl From Ipanema", has been playing in my head for weeks. It was a really long time since I had heard it, and this performance by the Braxton quartet takes the original Jobim tune from its lightfooted original melody into a ten minute long open-ended improvisation, with the rhythm becoming quite slow and implicit, the percussion limited to some bell-like sounds, the guitar strumming a few sparse arpeggios, the bass plucking a little now and then, Braxton's alto singing like a breeze, reducing the already vulnerable theme to its bare abstract essence and beauty, still recognizable if you know what the quartet is improvising on, unlikely if you haven't, full of sweet intimacy and warm empathy, and out of this fragile improv the theme comes back in its magnificent melody and compelling rhythm, the four musicians playing like they play this tune in night clubs every night, and yes, dance and weep.

The quartet is Anthony Braxton on saxophones, Kevin O'Neil on guitar, Kevin Norton on percussion, and Andy Eulau on bass. This great box brings you four CDs, the recording of a European concert in 2003, with gigs in Italy, Spain, Belgium, France and Portugal.

The "standards" they play, are wide in range, in terms of style and moment in jazz history : you get "Body and Soul", "Ruby My Dear", but also Miles Davis "Half Nelson" and Coltrane's "Mr. PC".

It's not free jazz, far from it, but the approach of the four musicians, though quite respectful for the original, usually includes some deconstruction and adventurous moves. 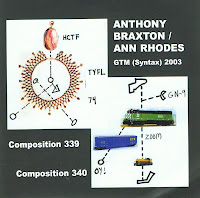 If I hate something, then it's modern worldless singing. Especially if it's abstract and without melody. Yet I must confess that although I thought the initial minutes would confirm my taste, gradually as this album evolves, it develops its own aesthetic. Braxton is phenomenal, but that you already knew, and I think it is due to his playing and the weird electronic underscore that Ann Rhodes is pushed into areas of singing that bring her far from the initial minutes. Her singing is not always wordless, sometimes you hear her count, or spell letters from the alphabet, whether these are part of the score or the improvisation is not always easy to detect. Braxton uses his usual range of saxes, from the very high to the very deep-toned, and the latter add great gloom over the dark electronics, that occasionally are likely to pierce your tympanic membranes.

The second CD is more intimate, with unison delivery of a typical Braxton composition full of high intervallic jumps, not really the kind of theme that will stick in your memory. The atmosphere has now become lighter, more playful, yet Rhodes, especially at the end, falls back into the kind of singing this guy hates. 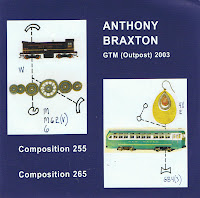 On "Outpost", Braxton is accompanied by Chris Jonas on sax on the first CD and singer Molly Sturges joins the duo on the second CD. The first CD starts with long and meandering unison lines, then the musicians go their own way, examining various approaches and emotions, from soft interacting to raw exchanges, to moments of near silence, only to pick up the original lines again as on clue, resulting in a quite hypnotic listening experience. The composition has a very strong rhythmic pulse, with each note carefully accentuated, as if they are all neatly arranged in a ascending and descending rows, rather than forming part of one continuum.

The second CD is again one long composition consisting of eleven pieces. The inclusion of Molly Sturges on voice works well on some parts, yet not always. This composition is without a doubt the most avant-garde of all the music reviewed in this article. It has its nice moments, yet I often wondered where it was going to. A little less captivating, or in the meantime a little too much of the same.