When you read the names of John Coltrane or Miles Davis or other jazz legends on album covers, you have to be doubly watchful: chances are high their names are being used to get your money out of your pockets. I had never heard it done with Ornette Coleman's name, but there's a first to everything.

The sad thing about the two albums that I'm mentioning here, is that I truly appreciate the label and the musicians, but somehow both of them have missed a point. 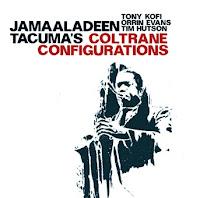 Bassist Jamaaladeen Tacuma is possibly best known for his work with Ornette Coleman's Prime Time in the 70s and 80s. Here he is bringing a tribute to John Coltrane, playing "India", "Dahomey Dance", "Impressions", "Naima", and "A Love Supreme". The band is Jamaaladeen Tacuma on bass guitar, Tony Kofi on alto and soprano sax, Orrin Evans on keyboards, and Jim Hutson on drums.

The music is a pitiful demonstration of technical skills over Coltrane's tortured and abused masterpieces. Coltrane's great, sweeping and compelling sound is reduced to night-club funk with slapping and wah-wah bass sounds and glittering fusion keyboards. Or Coltrane meets a third rank Bitches' Brew. It is full of pretense and false emotions, showing off, etc. And it's not that I hate Coltrane tributes, some, like Branford Marsalis' take on "A Love Supreme", I quite like even.

I think these four musicians completely misread the music of John Coltrane, even if they can play his tunes.
Dave Liebman - Turnaround - The Music Of Ornette Coleman 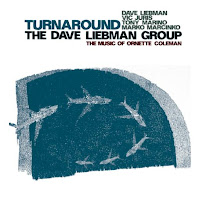 This album received the "Jazz Record Of The Year Award" from the German Jazz Journalists & Critics. It just shows how jazz journalists make their choices: a safe bet on Coleman as the historic jazz icon, a safe bet on Liebman the great sax-player.

The downside is what this band, further consisting of Vic Juris on acoustic and electric guitars, Tony Marino on acoustic bass, and Marko Marcinko on drums and percussion, does with Coleman's material. They turn it into your average middle-of-the-road jazz, just playing the tunes in a quite polished and orderly fashion, after having sucked out the spirit, the rebelliousness and the raw vision that the original Coleman material still has these days.

The playing itself is not middle-of-the-road though, just listen to Marcinko's drumming on "The Turnaround", or Marino's bass-playing on "The Face Of The Bass", Juris on "Bird Food", but yes, music is so much more than technical skills on an instrument. Even my all-time favorite tune, "Lonely Woman", is as on an earlier Liebman recording, reduced to new-agey pulp by his playing of the woodflute.

It is all sweet and nice, like a stuffed lion in a museum, looking quite healty, if a bit dusty, and you run no risk, there is no more danger, it doesn't move anymore, you can watch it, and remain totally indifferent. That's the advantage compared to the real stuff, which creates emotions instead of nice tunes.

What is wrong with the "German Jazz Journalists and Critics"? What about all this other great music that is being produced, also on Jazzwerkstatt?

I also truly hate writing negative reviews, but because of the big names involved here, I thought you needed some warning. There are more valuable things to spend your money on.