William Parker has something with Italy, he has released several of his own albums on the Italian Rai label, and he has played a lot with Italian musicians. Here are again two new releases, but with a totally different approach. 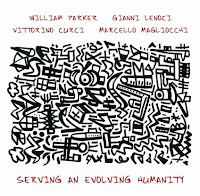 This album starts in the best of free jazz traditions: full blast ahead, with a piano that seems to hammer all keys simultaneously, wild sax-playing and a rhythm section that goes totally berserk. The band is William Parker on double bass, Gianni Lenoci on piano, prepared piano and voice, Vittorino Curci on alto and soprano, voice and megaphone, and Marcello Magliocchi on drums.

The "berserk" piece is suddenly harnessed into a repetitive pattern by Curci, with Lenoci following and releasing the tension too, and the piece turns into calm surroundings creating an atmosphere like rain dripping from the leaves after wind and storm have gone, and the piece goes even quieter, with the playing turning minimal, full unexpected turns, sensitive and raw, until all hell breaks loose again, detonating in your ears, relentlessly, ... and becomes even quieter afterwards ... yet somehow the tension increases.

The second piece of the suite starts with Parker playing arco and pizzi simultaneously, setting the scene for an eery and slow avant-garde piece, yet full of a bluesy soul. I am less convinced of the shouting by Lenoci (we could have done without), yet the rest of the piece is staggering : Curci's alto is wailing with a rare expressivity.

It took me some time to get into this album. At first listening it sounded somewhat unfocused, with no real sense of direction or coherence, yet after listening several times in its entirety, the music on the album does evolve, it does flow, and the three pieces do form one unity. There is a lot to listen to, and its worth listening to, more than several times. Enjoy! 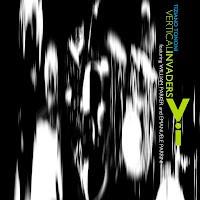 Italian drummer Tiziano Tononi is a great fan of the early free jazz of the sixties. He has made several tribute albums to Ornette Coleman, to John Coltrane, to Rahsaan Roland Kirk, and to Don Cherry. He also played with William Parker before, and released "Spirits Up Above"in 2006. Like on that album, Emanuele Parrini plays violin and viola.

The music is quite free boppish, with explicit rhythms and composed themes, yet it still is something else than what you would expect. Parrini's violin is one of the determining factors of the overall sound: his playing is slow, with long stretched notes trying to imitate a horn, often in the lower registers. The opening piece is an example in case, and on the wonderful "Like Leroy Jenkins", to whom the album is a kind of dedication, his minimal kind of lyricism shows its full expressive power.

On the three title tracks, they leave the beaten track completely and start exploring the various possibilities of combining two string instruments and percussion, and with great effect: Parker's bowing changing roles with Parrini going pizzi is quite nice, as is Tononi's rumbling drumming and precise accentuation.

Yet the musicians go beyond their usual instruments. Parker plays his shenai on one piece, and shakuhachi on a long and beautiful composition dedicated to Alice Coltrane.

The last piece is a long mournful reprise of "Like Leroy Jenkins", played solo by Parrini, a very sad ending.