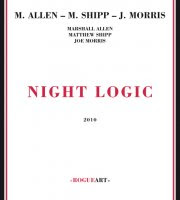 Saxophonist Marshall Allen is possibly best known from his Sun Ra collaborations, but he also released several albums under his own name on CIMP. We find him here with two of today's avant-garde icons, Matthew Shipp on piano and Joe Morris on double bass.

It is an album that leaves me with mixed feelings: some pieces are absolutely stellar, in the same style and among the best compositions that Shipp ever played, reminiscent of Pastoral Composure or Cosmic Suite. Not only the compositions, but the playing is excellent too, ranging from nervous gravitas on "Ark Of The Harmonic Covenant", the first track, over the pounding hesitations of the title track, the hypnotic repetitiveness of "Cosmic Hammer", to the moody soft sensitivity of "Harmonic Quanta" and the post-boppish gentleness of "New Age For The Milk Sea Nightmare".

The album also has two solo pieces: Allen's "Heart Aura" is deeply emotional and free, and Morris's bowed "Res X", which ends the album is a fit closure for this great album.

All this sounds excellent and fantastic : the music is intimate and expansive and lyrical like we've come to appreciate from especially Matthew Shipp. What goes totally against the rest of the album is Allen's use of the EWI (electronic wind instrument), which introduces awful electronics, full of bleeps and squeaks on "Bow In The Cloud" and "Particle Physics". It is a little less disturbing on the latter because of Morris's interaction with his bowed bass, but still...I know, they are in outer space so you need some intergalactic and futuristic sounds, only, it does sound like the early seventies electronics.

I hate to say this, but re-programming the tracks makes this a really great album.