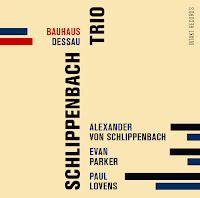 There are times when you (me) curse musicians like Evan Parker for being so damn hermetic in their playing, or like Von Schlippenbach for being far too abstract or too concrete yet hard to pigeonhole, or someone like Paul Lovens for seeming to be unconcerned about rhythm despite being a drummer, or all of them being so totally out there in their own solipsistic adventurous journey that they completely forgot they still need someone (you, me) to listen to their music and enjoy it.

Then there are times when these three icons of European avant-garde music play together and the result is magic. This is such a moment. Yes, it is abstract, it is hermetic at times, it is an adventurous journey, but one that is strangely accessible, with an openness and a kind of creamy texture (am I influenced by the cover art here? but no the music is creamy too) that is pleasing throughout.

The biggest strength of the album is its forward-moving dynamics, as opposed to the in-the-moment creation of sounds of so much free improv, that take you along, like a boat on a musical river, you're part of it, rather than watching it from the shore how things arrive and disappear, no, here you're floating along, which gives you the great pleasure of being able to follow the flux, evolve with its developments, whether through thundering rapids or ballad-like slower movements.

The biggest strength of the album is its warmth, its gentle and welcoming sound, despite its abstract nature, with Evans' tenor being quite expressive in his short staccato bursts full of multiphonic inflections and subtle nuance, or maddening hypnotic in his long circular breathing bouts, all accentuated by Lovens' storytelling on percussion, unusual, elegant and or disorienting, and Von Schlippenbach is the power that holds it all together, gives context, backbone and direction, although all three are quite volatile concepts in an environment like this one.

The biggest strength of the album is its fantastic interplay by three musicians who've seen it all, done it all, without any need to confirm themselves other than the ambition to exceed the quality of their art: to make it more eloquent, more expressive, offering new vistas into music, sound, texture, timbre ...

And now that we're at it : the biggest strength of this live album, is the enthusiastic audience that gives the three musicians the level of applause they rightly deserve.

This is music made for listeners.

Watch a performance of the trio in Ulrichsberg, Austria.