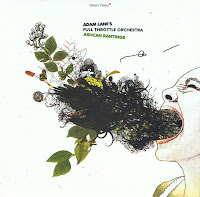 Wow, what an album! From the very first notes, you're sucked into jazz history, full of Africa, full of blues, with the interplay and the soloing of the highest level throughout. Adam Lane writes in the liner notes that "this is fun music, designed to uplift the spirit and bring the listener and performer to a more joyful place than they (we) were before", and believe, it more than delivers on that objective.

The themes are compelling, starting with funeral march-like first piece, "Imaginary Portrait", with African influences as on "Marshall", or Ellingtonian as on "Nine Man Morris", but the blues is all-pervasive, with great highlights in the quieter parts, as on the duet between Lane and Nate Wooley in the first piece, or Lane's intro to "Desperate Incantations". Despite the composed parts, the larger part of the music is improvised, over structural and rhythmic cells. Two of the compositions, "Ashcan Rantings", and "Lucia" already figured on Lane's "Four Corners" CD.

The solos are wild at times, bringing the music far beyond any concept a big band might have, with sometimes two or three musicians overlapping. giving expansive and expressive power to the already strong drive and pulse.

Lane himself is in full control of what is happening with his bass underpinning everything without limiting the band. The sound quality of the bass is absolutely exceptional too, with a kind of forefront presence that works really well.

The great paradox about this magnificent music is like the blues itself : it sounds so sad and melancholic at moment, so sweeping with "weltschmerz", sometimes so full of distress and anger, but the totality is so deeply emotional and full of joy that it's hard to describe. Lane's gut-wrenching and heart-rending intro of the title track says it all. The only piece that is joyful by itself is the last one, "Bright Star Calyspo" (sic), which collapses into wild and rhythmless soloing, before bringing the album to its great finale.

And it all fits, and there are no weak moments, not in the compositions (some of them, like "Mahler" will stick to your brain for a while), not in the interplay, not in the soloing. And you get your money's worth on top with this double-CD's more than ninety minutes of absolute musical delight. Adam Lane knows and feels and lives music. So far, all of his albums were among my favorites of the year, but this one is superb.

Man, man, man - this is music I will still listen to with joy in a couple of decades and recommend to my great-grand-children. (They will for once stop listening to the electronic rhythmic bleeps that some new device will integrate directly in the auditory part of their brains, they will for once stop being totally disinterested in the ashcan rantings of their great-grandfather and listen in awe to the great acoustic music of the past).

Sounds great. Lane's previous full throttle orchestra albums still wait in my "give an extensive listen to" cue. But this one seems different - no electric guitar and some great improviser Wooley, Ho Bynum, Bauder...looking forward to it.

Been a fan of Lane's music for a while, and his previous Full Throttle album landed near the very top of my 2006 year-end list, so I can say I've been eagerly anticipating the follow up. I'm still to get ahold of a copy myself, though.

Well, I must admit I that I personally cannot see why people think this is such a good album? I was most disappointed after all the ravings about this one - it's basically very mainstream and rather pedestrian. I'll listen some more and maybe change this (or wipe) later.

I'd be interested to hear his other things as this is most overrated.

Unlike joesh I think this album is excellent, I especially like tracks Mahler & Marshall.