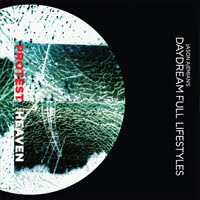 Sure, these musicians did know each other, and they had played together, but not in this line-up, and not with this music. So they meet, they play for an hour, and the result is this incredible fourty-five minutes of freely improvised pieces of fantastic music.

The "Daydream Full Lifestyles" are Jason Ajemian on bass, Tony Malaby on tenor saxophone, Rob Mazurek on cornet, Jeff Parker on guitar, and Chad Taylor on drums. You can also consider it a somewhat altered version of  the Chicago Underground Duo/Trio/Quartet, with Malaby on sax.

The music is lyrical, open-ended, unhurried and deeply sensitive. The instruments weave wonderfully floating textures of sound, with a strong inherent beauty.The big difference with the later incarnations of the Chicago Underground bands is the lack of electronic/electric experimentalism: the music here is entirely acoustic, and there are indeed moments that are pretty extreme, yet the totality of the sound is rather eclectic, integrating all that is great in the American jazz tradition: there is some blues, some bop, free jazz and more avant forms. This forms are mostly integrated into the totality of the concept, but to the band's credit, the different tracks also have a different feel and character, showing the various aspects of the same approach.

The only concept the band had was to respect each other's breathing pace : "Instead of music composed to a time signature or external clock, this is timed to each performer's internal clock. Everyone plays along to their own breath patterns. It's a chance operation. You compose music so it can fit into any overlapping of people’s breath patterns."

The result is a staggering performance by five stellar musicians. Free jazz at its best : expressive, innovative, joint creativity, instant composing, and first and foremost a great listening experience.

Excellent lineup, but does this only exist on vinyl???

I was waiting for your review of this Stef, sure sounds great

@wojtek - you buy the vinyl album you'll get a free code for a legal mp3(320) download inside.