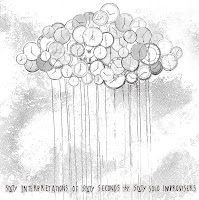 The project is the brainchild of Canadian guzheng player David Sait, whose "Postage Paid Duets" of last year was really strong. As on this album, he combines music by artists who haven't met, asking each one of them to play sixty seconds of their distinctive approach to this situation. Sait then compiled the snippets of sound into clusters of six pieces. It is a linear collage of sound if you want, with no overdubs.

Even if not everything works in terms of musical coherence, some are really strong, like the eletronic cluster on track 5, with Damon Smith, Lawrence Casserley, Tom Boram, Ignatz and Helena Espivall who embrace in their midst the sonic power of John Butcher's sax. I also like the great transition from oud-ukulele-viola-metalglassplasticstonemotors-alto sax-piano, among which McPhee and Mezei.Combinations unheard in the history of music, yet it works somehow. Not everything though. I have my doubts about the banjo playing, the hurdy gurdy and the whistling, but they help broadening the scope and the unexpected.

The music is intimate, refreshing, mind-opening, hypnotic sometimes, and well, somewhat irritating at others, but those moments are rare. The interesting aspect though is the incredible unity that can be found in this incredible bag of diversity, ranging from ancient music over folk to jazz and electronics. This is, in a way, an ode to music per se. It is no surprise that at times some radio program switching sounds intervene. Yet the ode is more to the individual expression of artists whose austere and often introspective solo moment actually shares a common understanding, emotional deep structure and humanity with all others.

It is a strange world we live in. Let its music be that way too.