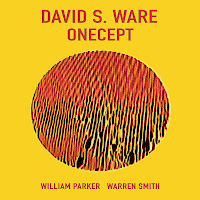 Like on his previous solo album "Saturnian", David S. Ware uses his stritch and saxello next to his tenor, and in all truth I really prefer the sound of the latter instrument. Both other instruments have a shriller tone, and for a reason unknown to me, it makes the saxophonist also drag his sound a little at the end of phrases, maybe because he has more lung capacity left with the smaller instruments, ... I don't know.

In any case, this album celebrates Ware's 50th year of saxophone playing, hence his interest in picking up some other horns that just the tenor, and he wanted to celebrate this with William Parker on bass and Warren Smith on drums and tympani.

Compared to other albums, there are many differences : the music is a little more abstract, less obviously based on themes and the rhythms have become more ethereal too, arising out of the spontaneous improvisations, and possibly too because of the absense of a harmonic instrument. As compared to some of his earlier records, at more than several occasions he leaves room for the other musicians to come into the foreground, giving them ample solo space.

The title, "Onecept" refers to the idea that there is one direction, "one concept" behind the whole album, with little differences, shades of playing, but all part of one undividable whole, where musicians meet each other and where musicians meet listeners, because of the universality of the music.

His playing his expansive, expressive and lyrical, Smith and Parker are the ideal collaborators for this project.

If you want David S. Ware at his best, listen to "Live In Vilnius", or "Live Around The World", "Shakti" or "Surrendered".

Much as I love Matthew Shipp, I'm looking forward to hearing this trio setting. I hope he uses the extra space well. (I'm sure he does.)

@Richard
Yes, he does! Love that album. Just read that there will be a limited vinyl issue of Onecept including two exclusive tracks! (on Rank And File Records who also released Doyles Alabama Feeling)