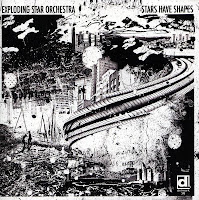 Three years ago, trumpeter Rob Mazurek started this magnificent "Exploding Star Orchestra", creating a whole new musical subgenre in the process, adding big band with electronics, new music, repetitive minimalism and jazz, colored by some additional sonic weirdness, including the sound of electric eels, resulting in a wall of sound built up by layers and layers of musicians playing either in agreed arrangements or not. In the concept slower parts emerge which give soloing space to primarily the trumpet.

The overall tone is dark, unfathomable, ominous, with the solos sounding as cries for help in a totally inhospitable environment.

I called their first album "Where Are All From Somewhere Else" from 2007 a masterpiece. I gave the band's sophomore album with Bill Dixon on trumpet a five-star rating.

On this album the band continues in the same vein, starting with upbeat whistling, but soon the sonic swell rises out of empty space to grow and expand and once it gets sufficient volume, several little stories emerge, played by the different instruments, the vibes, the saxes, the flute, the trumpet, yet never really dialoguing, or soloing, but adding eery phrases over the uncanny backdrop of noise out of which they emerge and return into.

This stellar band is further expanded with "sounds from a variety of sources, including: rain from the Brazilian Amazon, insects at the turn of an eclipse, the hammering  overdrive of bicycles in Copenhagen, stacked muted cornets run through various filters, drones built from electric eels and piano feedback, hi-frequency sinuous lines from tone generators, pitched bass guitars, and other prepared instruments"

And truth be told, the magic works again. The sonic landscape or universe is unique, full of desolation and cold beauty, full of menace and sadness, although the short last track sounds a notch less desperate.

didn't know the exploding star orchestra has released new album, i've got to make mine this one, loved the previous two