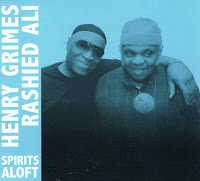 Last year Porter Records already released a bass & drum duo album by two of free jazz great musicians: Henry Grimes on bass and violin, and Rashied Ali on drums, recorded live in February last year, some six months before the great drummer passed away. An unsual line-up, but one that seems to work.

The album starts and finishes with a short poem by Grimes, but the music in between is raw and ferocious, starting with the long "Rapid Transit", on which Grimes leads with screeching violin sounds, an intro for Ali to start attacking his drums, tribal, polyrhythmic, becoming a solid backbone for Grimes powerful plucking, that shifts back to bowing, raw and intense near the end of the piece. "Oceans Of The Cloud" is slower and evokative of unknown worlds, filling empty space with sparse notes and weird sounds, light and breezy. Grimes' violin-playing is technically bizarre but highly expressive to say the least, as is also the feeling of the enthusiastic audience. "Larger Astronomical Time" is a great drum solo, something I usually dislike, but Rashied Ali keeps the attention going, offering a great lead-in for some ferocious solo bass-playing by Grimes, first pizzi, then arco, with some limited accentuation by Ali at the end.

And so it goes on, strangely enough they give each other lots of space, which gives sometimes the bizarre feeling that they are playing either drums solo or bass solo consecutively, with limited moments of actual joint playing, but either way, the quality and the energy are high. You can feel the joy they had in the performance.

And it's that what makes this a memorable album, two musicians giving themselves to the full, believing in their art and succeeding in transferring this to the audience: great stuff.