It's already hard to keep up with all new releases, but if musicians now also start releasing several albums a year, in various genres and all worthwhile to review, there is little choice left but to combine them, but also to rejoice because of so much good music.

Ned Rothenberg needs no further introduction: a fantastic clarinet-player and composer, open to any genre and style, and proficient in many, he uses this broad background to treat us to some special records. 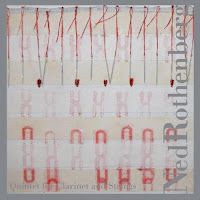 Quintet For Clarinet & Strings is almost modern classical music, not only because of the strings, but primarily because of Rothenberg's abstract and intense compositions, often dissonant, varying between long repetitive phrases, lots of counterpoint or more open textured. You get it all. All through the compositions, you get the rare event of a clarinet which is used with all the possible tonal expressivity of a jazz instrument, adding tremendous power to the more traditionally played strings.

The nice thing about the compositions are the variety of moods and influences, ranging from romanticism over jazz to more cinematic parts. Rothenberg gives the quartet also ample possibilities to add their own ideas and leaves them plenty of room to play the long pieces. On some, like "Setting Stones", his own contribution on clarinet is minimal. The last track "Finale" is pretty intense, but the best piece is the opening track, with its long and eery central moment when Rothenberg let his clarinet soar, first in circular breathing over light touches by the strings, then adding a wailing quality to his playing.

It will require some open ears, but it is a treat. 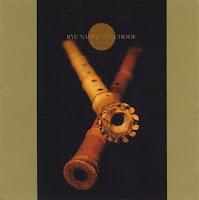 As a young man, I was a great fan of Tony Scott"s "Music For Zen Meditation" of which I mysteriously own two copies. I never listened to it for meditation purposes, but I liked the purity of the sound and the absolute calm the music expressed, linked to a emotional element that can be qualified as deep compassion with everything. Buddhism, in a nutshell.

That is the memory that comes back to me now, when listening to Ned Rothenberg playing his shakuhashi. The Japanese flute is actually quite expressive, offering a wide range of tones, and allowing to bend timbre while playing, flexing or bending tones, resulting often in a kind of plaintive fragile cry.

He plays several solo pieces ("Emergent Vessel" and "Shadow Detail") and there are some duets, yet with Rothenberg ceding his position to either Riley Lee or Ralph Samuelson, on shakuhachi, and with Stephanie Griffin on viola, Yoko Hiraoka on jiuta shamisen and voice.

The long "Dan No Tabe", with Stepahnie Griffin on viola is to me the highlight of the album, because of the almost perfect match between both instruments, and its incredibly slow and carefully mastered sense of pace.

It all sounds very Japanese, with no clear indication that jazz or other genres are involved, but as Rothenberg explains, these are all his own improvisations and compositions in the Japanese style, but without following any specific rules that are ususally at the foundation of the music. The music is a "little westernized", but it will be impossible for the casual listener to notice this. 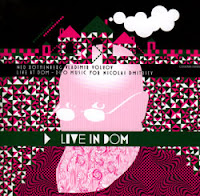 But because this is a jazz blog, you get your jazz too. On this album, Rothenberg plays alto, clarinet, bass clarinet and shakuhachi, and Russian bassist Vladimir Volkov joins him for ten improvisations that are absolutely fantastic. Abstract in nature, often with high intervallic jumps, but the two musicians correspond quite well, with faster than light reactions and joint build-up of a piece's character.

But it is jazz, without a doubt : the phrases, the rhythms, the expressivity, the joy, the fun, and the direct appreciation you get as a listener from sometimes complex interactions. Volkov plays more arco than you would expect, and the effect of that on the music is great, because it brings both instruments to the same level of sonic and lyrical expressivity.

It shows a totally different side of Rothenberg,with moments of fun, madness, deep sorrow, and wild explorations, with less restraint and composure than on the albums reviewed above, yet an environment that fits him equally well.