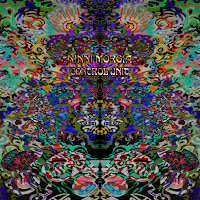 As the art work suggests, we're entering a psychedelic environment, full of weird colors and fascinating hues. And so is the music, played by a trio but often sounding like a bigger band. Ninni Morgia plays guitar, bass, electric autoharp, electric sitar, keyboards, percussion and kalimba, Daniel Carter is on saxophones, trumpet, clarinet, flute and voice, and Jeff Arnal plays drums, percussion and thumb piano.

It's hard to qualify the music: it holds the middle between prog rock, psychedelic rock, free jazz and world music, but then without the mellowness and shallowness usually attributed to the latter. There are no real vocals either. There are clear influences by bands like Soft Machine or even early Pink Floyd.

The soundscapes that Ninni Morgia creates on his electric instruments are, in combination with Arnal's percussive drive, very hypnotic and mesmerising, with Carter having a ball by playing his sax and trumpet over this flowing background.

One of the album's highlights is the long "Dhyana", with sparse electric guitar notes, and unusual yet powerful singing by Daniel Carter, after which he switches to sax.

Ninni Morgia was not known to me. He is an experimental guitarist from Catania in Sicily, now living in New York, and primarily active in (noise) rock bands. The last thing you hear on this album is noise, though, but carefully crafted and varying soundscapes, each with its own character and emotional quality, all relatively accessible and welcoming, but not smooth: like with rock music, it has this raw, direct approach, more concerned with sound and overall effect than with harmonics and thematic development. The label's website mentions Derek Bailey, Jimi Hendrix and Miles Davis as references, but there is really nothing on this album that relates to them musically.

And it works : for sure the original musical vision is Morgia's - and a strong vision at that - but the overall result is without a doubt as much to the credit of Carter and Arnal who complete the psychedelic vision to perfection. Not for the die-hard jazz fan, but pretty intense and captivating.

The album is released on double vinyl LP, but is also available on some download sites.