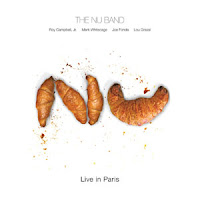 Few bands can carry the sound of "free jazz" so well as The Nu Band, consisting of Roy Campbell on trumpets and flute, Mark Whitecage on alto and clarinet, Joe Fonda on bass, and Lou Grassi on drums, all four seasoned musicians who demonstrate again what experience can mean in a freely improvised environment.

Three tracks are fully improvised, with Lou Grassi's "Avanti Galoppi" one of the band's essentials on the playlist, starting with a composed theme and concept.

"Somewhere Over The Seine", is free jazz in its purest nature : implicit rhythms, yet great pulse and drive, with Whitecage and Campbell demonstrating their fabulous skills, soaring, flying, howling, slowing down for Fonda's solo, when he picks up his bow for some meditative and almost quiet minutes, with Campbell's muted horn joining the sad weeping, which suddenly becomes more abstract, then Whitecage starts a swinging theme on his sax, and the rest of the band follows suit, joining the mood and rhythm.

The second piece, "Bolero Francaise" (sic), is a slow and melancholy piece, not exactly the dance the title refers to, that gradually picks up tempo and volume, leading to the kind of open-ended avalanche of sound, massive and expansive, over the endless rumbling of Grassi's toms, with Campbell and Whitecage surpassing themselves.

"Avanti Galoppi" then, has a high speed bass and drum forward propulsion, as the title suggests, and a great slow theme, worthy of the best in jazz history, that both horn-players slowly start to diverge from and expand on, full of soul and blues and sadness, while the hypnotic galop continues at steady speed, without once changing for the whole thirteen minutes, until the whole thing comes to a grinding halt in the last five seconds.

"The Angle Of Repose", the last track, starts somewhat in free form, searching for its own nature, but gradually Fonda and Campbell give the piece a boppish drive, in a truly terrific duet between trumpet and bass, until the magic erupts when Grassi and Whitecage join, delving up jazz history in the process and making it shine, shine, shine, ... and the great thing about this band is that they take themselves not too seriously: fun erupts, some silly interplay, some crazy shouts, a wild drum solo and a grand finale.

Wow, I love this band and its great music.

The performance was recorded live in Paris in 2007.

Check also their other albums, reviewed on this blog : "Lower East Side Blues", "The Dope And The Ghost", "The Nu Band Live".