The Art Of The Duo

In the earliest days of mankind, next to more functional and formal language utterances, our distant ancestors did something special: they made music, creating melody over rhythm and sharing the experience together, creating, communicating and enjoying it, listening and interacting, possibly dancing too. Unlike any other art form, this is still magic today. There is nothing comparable to the completeness of that experience: pure, social, expressive, and lifting the individual high above himself or herself, becoming part of a communal experience, something spiritual, something bigger than life.

This feeling of communion and spontaneous creation is the essence of free music. That's why I like horn-percussion duets because they embody this in its perfect form of freedom without becoming the chaos of too many voices conflicting, because it allows for more precise and attentive listening.

That's what I felt when I heard this Polish duo for the first time some weeks ago. The Slug Duo is Jakub Suchar on drums, percussion, moog synthesizer and elctronics, and Gerard Lebik on tenor sax, contra alto clarinet, generators, DIY, and electonics.Surprisingly enough, the duo released two albums this year on the same Polish label. 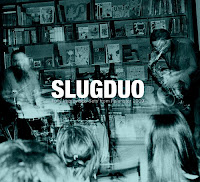 The first album was recorded live at the Falanster Club in Wroclaw, Poland, in November of last year. The music is mainly acoustic with ongoing superb and varied free improvisation : from incredibly playful and rhythmic interaction, over fierce and wild moments, they can easily switch to more sensitive slower passages and back. It is all very straight-ahead, without too many pyrotechnics, and it is really a joy to listen to from beginning to end. It is pure, unadultered fun. The audience, though limited in number, claps and cheers, adding some value to this performance. It is so good, that it is real easy to recommend. 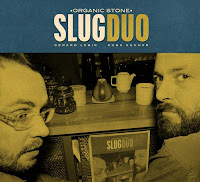 Their second release, "Organic Stone", is a little bit of a different beast. Recorded in the studio, it starts well, with a deep slow and free interaction between howling tenor and thundering drums. On the third track the electronics enter into play, and then this guy's attention starts to drift off. Yes, there is some drumming to be heard under the crackling noise, but we are far away from the pristine joy of celebrating music in its simplest form. We have left the realm of "close celebration" and we have entered the realm of "distant posture", with sounds that are made of plastic instead of made of wood. The same holds true for the rhythms, why would you process them into an endless repetitive beat if you can add lots of variation and subtle changes with natural playing. Luckily, the natural sound dominates most tracks and the playing is really good. 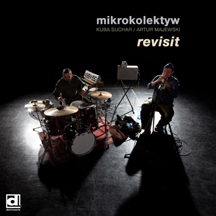 We find drummer Kuba Suchar back on this new album on Delmark, with Artur Majewski on trumpet and electronics. That it appears on Delmark is no real suprise, since the influence and support of Rob Mazurek is quite clear, not only because of the format, but also through the use of electronics in processing the sounds. But both Mazurek and Majewski have influences that go back to Don Cherry, which is obvious in the joyful free and melodious playing that Majewski demonstrates.

But then the whole thing falls flat on its face at moments because of the use of silly electronic sounds. And don't get me wrong : there are tracks with electronic processing that really sound good. I have always been a fan of Mazurek and the Chicago Underground Duo, for whom electronic processing is almost a must, but you have to know how to use it, and to which degree. It should be functional for the overall listening experience, and not disturb the rest of the sound.

This is again one of those albums that sound great if you just select the better tracks. And if the electronic part is used sparingly, the result is really powerful, like in "Running Without Effort", or very functional as on the title track or on "Tiring Holiday", it works to perfection.

Maybe I'm getting too old, but why would anyone want to ruin the good ideas they have? An album with great moments, but unfortunately insufficiently consistent.