I thought albums were released globally, especially in the digital age, and certainly with the big labels such as ECM, but that's apparently not the case. I notice now that the Norwegian-French ensemble "Dans Les Arbres" will only release its first album on ECM in the United States two years after its European release.

Dans Les Arbres is Xavier Charles on clarinet and harmonica, Ivar Grydeland on guitar and banjo, Christian Wallumrod on piano, and Ingar Zach on percussion. They are absolute masters of minimalism and restraint. Listen with what sense of precision and caution they bring their fragile and beautiful music. 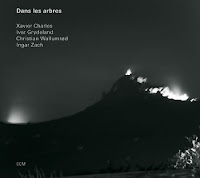 You can read my enthusiastic review of their first album here. I think I was the first to review it, and luckily my viewpoints were shared by many reviewers that followed.

I was hoping to hear their second release on ECM (originally planned for this year), but I guess we'll have to wait a little longer.


While waiting, and as an introduction to our US readers, here's already a glimpse of their stunning and hypnotical music, as recorded and broadcasted by French national radio in February of this year.