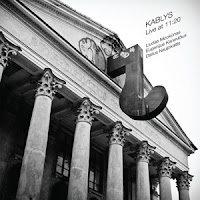 I was quite enthusiastic about Lithuanian sax-player  Liudas Mockūnas on "Vacation Music" in a recent review, and now he's back with a trio, with Eugenijus Kanevičius on bass and electronics, and Dalius Naujokaitis on drums.

From the very first notes of "Hooked", the trio drags you into their musical world, which is at first free, uncompromising but still relatively welcoming, but gradually, when the soprano is changed for the tenor, the atmosphere becomes more violent and angry, with steady beats and wailing sax, raw and abrasive, then the beat drops for some quieter intense electronics dialogue with the baritones sax, on "Broke", when the drums start kicking in a kind of primal and dark basic irregular rhythm which in conjunction with the mad bass is the perfect environment for an absolutely firghtening honking horn, raw and full of energy, repeating the same phrase like a machine gone crazy.

The music calms down a little for "Triumph Of Pagans (In Memory Of The Great Zaigris Battle 1410)", but that's only the warm-up, because it doesn't take long before all hell breaks loose again, in a less industrial sounding context, with walking bass and steady pulse, but Mockūnas's playing remains full of force, but now with a notch sadder tones coming into play, evolving into more melodic lines, somehow reminiscent of McPhee or even Ayler.

The second side of the vinyl album starts with "Emphatic (Dedicated To Jimmy Giuffre)", with - no surprise here with the dedication in mind - a more subdued atmosphere at first, more cautious in the interaction, although equally free, yet again gradually the power picks up and the raw expressivity takes over from subtlety. The album ends with "Back Door", again with a pumping rhythm and fierce wailing, and with Naujokaitis mad drumming unfortunately cut short to end the album.

This is as raw and as direct as it gets, but in contrast to many other blow fests, these guys know what they're doing, and manage to create a coherent sound that is entirely their own and remains highly enjoyable even after repeated listens.

Do you know of dimeadozen.org? Much free jazz from fm radio there. I have a small blog I am starting to put up jazz too (noncommercially released material only).
http://oneweekman.blogspot.com