A piano, percussion, and the occasional participation of a Norwegian trumpeter and singer, that's the common factor between the two albums shortly reviewed today. 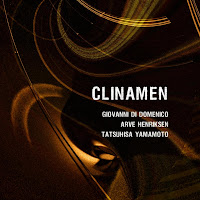 Led by Italian pianist, Giovanni Di Domenico, this album explores the space of interaction, based on composed structures, yet evolving freely based on how the other musicians react. We read :  "'Clinamen,' in ancient Roman philosopher Lucretius' De Rerum Natura, is the magic force that makes an atom change direction during its fall and thus be able to hit other atoms and "create" energy and life". That's how the music sounds, yet still within the confines of traditional harmonic concepts. Tatsuhisa Yamamoto's percussive and highly creative interplay is possibly the most striking aspect of the music, going against the grain, avoiding the subtle forward flow of the music by adding counterrhythms and odd-metered interventions. Arve Henriksen is the most romantic, with slow and electronically altered trumpet playing and angelic worldless singing. Some pieces, like the long "Masks That Eat Water" have lots of variation, unexpected twists, and in this composition a gloomy atmosphere on top. The changes of approach are a little too radical at times, leading to a lack of coherence, as with illustrated by the shift from the new-agey "Vatos" to the mad "Idiot Glee". Excellent playing and creative genre-bending ideas, but stylistic unity might have have made it even better. 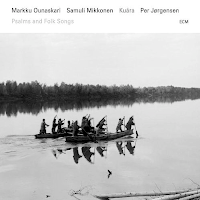 This album by Finnish drummer Markku Ounaskari, has the typically expansive ECM sound. He was asked to present his own project, and came with "source material including Russian psalms and folk songs from displaced Finnish peoples (Karelians, Udmurtians, Vepsäns) – all approached from improvisational perspectives". Pianist Samuli Mikkonen is the main voice on the album, and Norwegian trumpeter Per Jørgensen joins on several pieces. The "source material" adds a folksy and spiritual flavor to the improvised jazz, with strong and often repetive melodies offering the easily identifiable themes. Some of those are of a stunning beauty, like the slow "Tuuin Tuuin", on which Jørgensen's trumpet plays some heartrending phrases over a sweet piano melody. Some of the other pieces fall back on general ECM romanticism, with sparse notes, and great atmosphere creation, nice but with not much character.

Ounaskari's drumming is really in the background, not driving the music, but adding touches here and there.

Jørgensen's singing is less angelic than Henriksen's, and he is more used to direct singing, as we know from his own albums, but at times he moves a little bit in the direction of Dhafer Youssef, the Tunesian power singer.


Both albums are nice, well-played, quite accessible, with excellent moments.