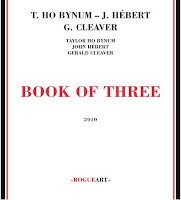 I read in a (philosophical) novel today "My Emma has length and width and breadth; she has no shape of course, because to have a shape she would have to have parts, and her parts (if any) are not of the world of Space" (Stefan Themerson, The Mystery Of The Sardine).

I also watched a lively discussion on Youtube between Stanley Crouch and James Mtume on whether Miles Davis was a just "a prostitute" (Crouch) or great artist (Mtume). Mtume says : "we only wanted to do one thing, and that is to expand the dimensions of the music".

Both totally unrelated comments are of course hard to combine, unless you happen to listen to this album by Taylor Ho Bynum, John Hébert and Gerald Cleaver, without a doubt among the best players of their instrument of the moment.

But of of course they do much more than that : they make music that has "length and width and breadth and depth", but no real recognizable shape to speak of. Having "shape" would mean that any of the previous adjectives would have to go, because confining the attributes to the world of Space would limit its possibilities. At the same time, they offer us a glimpse into expanded dimensions of music that Mtume talked about.

Enough philosophised: this is great music.

Their music is one of real unbearable lightness, with refined sounds from the three instruments creating intimate trialogues and subtle sonic environments, sometimes rhythmic, as in "Meat Cleaver", but more often than not just hovering above the material world, with even the drums, Motian-like accentuating and creating the overall sound rather than setting the pace. On most improvisations the instruments are used in their traditional way, voiced and without too much resorting to extended techniques, except on some tracks, but they don't need that: their musical creativity suffices to offer us something special, a unique treat for listeners.

Most improvisations are slow, carefully and cautiously developing the musical universe of the nine pieces, which are often dark or contemplative, and form a fantastic coherent sequence. So, lots of depth, with the lack of shape leading us, the listeners into new musical dimensions. We love it.

I first heard of Taylor Ho Bynum through his various Braxton projects, and thought he was excellent.

I'm glad to hear his career is going so well. He's in good company here.