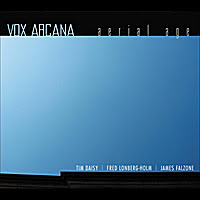 Vox Arcana is a band or project by drummer Tim Daisy, better known from his collaborations with Ken Vandermark, and here in the company of James Falzone on clarinet and Fred Lonberg-Holm on cello and electronics.

Daisy's compositions are extremely tight and rhythmically complex, offering the second or third instrument the space to improvise, or in contrast tend to be more open structures floating well above solid ground with no safety net in sight. There is a lot of virtuose acrobatics, and to the credit of the musicians the improvisations are extremely focused on the pieces original concept, often abstract in nature.

Daisy plays a lot of marimba, and the combination with the cello and the clarinet offer a very warm and intimate sound, as on "Chi Harp Call in E", but once you're snug in your comfort zone, you're torn out of it by some screeching cello improv and wild chaotic percussion, or the sequence is the opposite as on "Winnemac", starting in very avant avant-garde, yet switching to sweet harmonic clarinet playing by Falzone, again disrupted by electronically altered sounds.This clash and unexpected turns and stylistic changes are the characteristic of each piece.

The "arcane voice" means that it is understood by few, and that is clearly the band's trademark: hermetic in its overall accessibility, yet mixing so many styles and subgenres like a cloth woven of wool and silk and plastic, utterly creative yet impossible to pigeonhole. Interesting listening yet hard to get into. 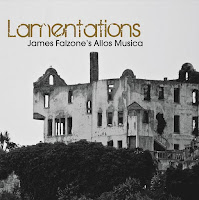 With "Lamentations", we find James Falzone in the role of leader of a trio with Ronnie Malley on oud and voice, and Tim Mulvenna on hand drums and percussion. They bring Middle-Eastern music, or rather, their own music in the Middle-Eastern tradition of rhythm and scale, on eighteen tracks, mostly very short with a few exceptions.

Their playing is absolutely excellent (although Malley's singing on one track somewhat less so), and more accessible than the original music. As a result, the music is somewhat cleaner than you might expect, less unrestraint and elaborate in the improvisations and less emotionally passionate than in the deep yearning that is so typical of Arabic, Turkish and Persian music.

But because of its intimate quality, it is a great introduction for those not familiar with the music of the Middle-East. 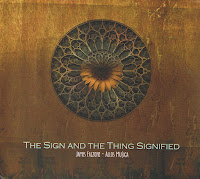 I only got hold of this album recently, and it is incredibly good. Next to Falzone on clarinet, we find Katherine Young on bassoon, Amy Cimini on viola, Kevin Davis on cello, Brian Dibblee on double bass, and Tim Mulvenna on drums, hand drums and percussion. The music is a mixture of chamber jazz and world jazz, with some avant-garde and classical thinking in the overall approach, and the result is a calm, warm and welcoming piece of intelligent and creative music.

The title refers to the works of the Swiss linguist Ferdinand De Saussure, whose thoughts were the object of many classes I had at university, so it's a strange thing to find him back after some decades in the form of music. Falzone calls his own music symbolic, referring to other things than the music itself, other parts stand on their own. How all this relates to each other, I will leave to greater minds to analyse, yet the music itself does not sound intellectual or sought: it flows naturally, whether improvised or composed. Intelligent with subtle emotions.