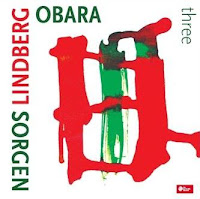 Polish altoist Maciej Obara releases his second excellent album of the year, now in a trio format with John Lindberg on double bass and Harvey Sorgen on drums.

The result is jazz at its purest : free, rhythmic, lyrical, full of soul and depth. Obara's playing is fabulous, with a nice warm tone, extremely versatile and with an emotional power that brings him close to Tony Malaby : he has the same quality of making his horn weep and sing at the same time, full of incredible passion.

Lindberg is one of the best bass-players and composers around, due underrecorded, recently working with Wadada Leo Smith, but most of his output as a leader is really worth checking out for. His playing has the same powerful lyricism as the Polish altoist and hence a perfect match. Listen to Obara softly moan over Lindberg's arco on "Wolverine Breath", as if both instruments were designed to play this piece.

Harvey Sorgen is the regular drummer of the Fonda Stevens Group, but also with Hot Tuna in one of its last line-ups in the nineties. His drumming is also underrated, as he demonstrates here again, both in the uptempo and slower pieces he demonstrates his rhythmic subtleties. Especially in the more open-ended pieces, like "Muss Influx", his implicit keeping of rhythm is brilliant. Or listen to his precise underpinning of Lindberg's boppish solo on "Noodles With Sammy Blues".

The three musicians give it all : raw power and abundance, but also sensitive moments, fixed themes and solid rhythms, but also more adventurous excursions. Obara is not a screamer, nor is he a sonic innovator, or a musical iconoclast, and he doesn't need to. The quality of what he brings us so much fun that he should stick to it, taking jazz tradition, with soul and form and interplay, in a completely modern environment.