Creatures in black and white and music .... 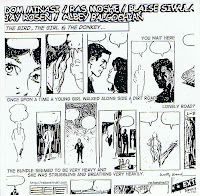 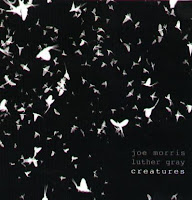 A black and white cartoon panel series with their conversation bubbles empty graces The Girl, the Bird and the Donkey, while Creatures presents a black and white pattern of birds in flight. Both of these covers represent well the sounds within, musical explorations taking flight with the musicians collectively making up stories that are never told the same way twice.

Dom Minasi's The Bird, the Girl and the Donkey begins with a swirl of tenor and alto sax, the guitar fluttering below, a little deeper in the mix, and the percussion providing a rhythmic net. Soon the bass becomes more prominent, lending a new voice to the proceedings. The interplay never lets up, group improv leading to a single voice rising above the others, only to be subsumed back into the melodic stream below. On this album New York guitarist Minasi teams up with Blaise Siwula on alto sax, Ras Moshe on tenor, Albey Balgochian on bass and Jay Rosen on the drums. This ensemble's interplay is intensely enjoyable to follow, inviting you to jump in almost at any point to be treated to fiery sax lines or Minasi's own imaginative improvisations. In fact, the session leader often takes a backseat to the dominant voices of Siwula and Moshe. The drums keep the group together, giving and taking enough energy and volume to keep each collective ideas happening.

Guitarist Joe Morris and drummer Luther Grey's Creatures, a stripped down ensemble of just guitar and drums, kicks off with the guitar spinning a melody in the lower register, the drums providing subdued accompaniment. As the stream of consciousness of the tune unfolds, the interplay between the two instruments becomes more and more complex. These songs, more like conversations, reveal an impressive rapport between the two musicians -- they are fraught with tension and tacit understanding. It is a treat to listen as the songs evolve from meandering melodies to knotty thickets of ideas.

While the instrumentation has some similarities - both have percussion that serve the conversation and a clean toned guitar unafraid to produce some heady melodies - there is something else that connects these two recent releases. Perhaps it is that though they both are entirely improvised, neither recording is overindulgent or uninviting. Also, there seems to be an underlying logical progression to the music as it expands, builds and releases at the right times. On improvisational recordings like these, where the music that is made is made but once, and structure is of the moment, I find hard to comment on the songs individually, rather I would recommend blocking out a solid chunk of time to approach each album as a singular experience.

These two albums are performed by masters of their craft. The spontaneous creations of these tunes expose a raw beauty, regardless of the number of musicians involved.  Morris and Gray's duo outing cover a lot of sonic ground and Minasi's larger ensemble makes compelling collective music with each individual voice distinct and integral. Both of these albums are well worth a good deep listen.