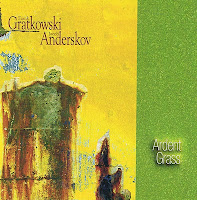 There is the kind of mad, passionate attraction that fuels one-night stands and Las Vegas marriages, that mad desire that sweeps you away at first glance; wonderful, perhaps, but typically short-lived, and often leaving deep disappointment in its wake. Of course, there is its equal but opposite passion: instant antipathy. Somewhere between these poles of feeling is the sort of relationship that grows over time, built by affection, respect, and a mature appreciation of the other. Such relationships tend to deepen and endure. Frank Gratkowski is the type of musician who engenders this kind of relationship with his listeners. He is unlikely to bowl you over or to leave you fuming on first hearing. His appeal is more subtle; his virtues, while manifest, are of a mature variety that take root and grow with repeated listening.

Gratkowski is a good saxophonist, a fine clarinetist, and a superb bass clarinetist; these instruments form his usual musical arsenal. But it is Gratkowski's musical intelligence, his superb compositional sense, and his ability to develop compelling narrative lines that are perhaps his greatest strengths. Many of these virtues are on display in Ardent Grass, Gratkowski's new duo recording with pianist Jacob Anderskov. The title puts me in mind of Walt Whitman's epic poem, Leaves of Grass, which is nothing if not ardent. Gratkowski has played with a number of fine pianists, including Misha Mengelberg, Fred Van Hove, Simon Nabatov, and frequent collaborator Georg Graewe; however, Gratkowski has only released a couple of duo albums with pianists (one with Graewe, one with Mengelberg). Neither of the preceding reeds-piano duo albums, I think, has been an unqualified success, and one has to say, the album at hand follows this pattern.

Anderskov has an impressive resume and is undoubtedly a fine pianist. On Ardent Grass he is all that one might ask for in an accompanist; sensitive, a good listener, and technically capable. This is perhaps part of the problem, for the album calls for something more than an accompanist. It asks for, indeed requires, a partner, someone who can push Gratkowski rather than merely support him. Say what you will about Mengelberg, he is not afraid to strike out in his own fashion and force his partner to react. I prefer waywardness to absolute correctness. For Graewe's part, he has the confidence of many avant-garde improvisational experiences to guide his playing, and can engage in the sort of push-pull that one would welcome more of here. Gratkowski's usual forum is the trio and quartet, often with piano, and I think in these larger group settings, Gratkowski's numerous talents shine more brightly. He seems to thrive on the more complex interplay among the musicians. For example, check out Gratkowski's trio album, Quicksand, with Graewe and percussionist Paul Lovens to see how vibrantly Gratkowski can play off Graewe's piano in alliance with Lovens' sparkling percussion.

Still, I would not want to give a wrong impression of the overall accomplishment of the album. There are many fine moments here. The nearly-11 minute opening track, "Narrative," is all that its title implies, and Gratkowski spins out the sort of narrative line that is both lovely and strong. The title track, the most powerful piece on the album, itself seems to oscillate between poles of powerful feeling. The remaining six tracks are of a high standard, if not quite deserving of the appellation "compelling." I listened to the album several times over and it did not pale on me. Like other Gratkowski albums, I think it will reward repeated listening; indeed, like most mature pleasures, its deeper attractions are likely to reveal themselves only in the course of time.