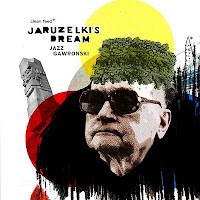 Any album with a cover of the last communist leader of Poland sporting a topiary hat is a promise. It's a deal between the musicians and the listeners that they are in for something unexpected. And just from the first few seconds of "The Mastella Variations", the promise is delivered.

Jaruzelki's Dream by Jazz Gawronski is a thoroughly modern sax, bass and drum trio outing that matches an unapologetically free approach to some joyous music. Blending elements from the tradition of free jazz ("The Mastella Variation") to rock ("Sei Forte Papa"), brief glimpses of punz-jazz ("Zibboniek") and sparing elements of nu-jazz ("Pimpin' The Papamobile"), their uncluttered focused approach to the music is refreshing, challenging and quite fun. Clever uses of dynamics and rhytmic devices shake up the tunes, keeping them from getting repetitive, and allowing each musician ample space to create.

Piero Bittolo Bon's alto sax is bright and clear, his well articulated never-ending melodic lines present ideas upon ideas, often seizing upon one, turning it around and examining it thoroughly, before tweaking it and moving on. Bassist Stefano Senni and drummer Francesco Cusa's accompaniment is sharp, and whether they are supporting or taking the lead, the interplay is tight and precise, sometimes grounding the sax, sometime antagonizing it, but always spurring it on.

A quick trip to the Clean Feed site revealed that the trio has quite a pedigree between them. Hailing from northern Italy, they have played individually with Anthony Braxton, Stefano Bollani, Tom Harrell, Eddie Henderson, Chris Speed, Tim Berne, Elliot Sharp, Paolo Fresu among many others.

If I were to compare the competence, energy and freshness of the album -- and though they differ greatly in many ways too -- I would think that perhaps Jon Irabagon's recent "Foxy" is fair game. Like Irabagon's album there is also an extended joke through the song titles and packaging. Though I'm not up enough on Eastern European history and culture to get what I have to assume are puns and plays on words, the albums humor and sarcasm comes through well enough in the songs. At the same time there is also great reverence and respect for the music, which makes for some good clean fun. For example, Polonium 210, a radioactive material first discovered in Poland, is used to title a sophisticated and melodic tune featuring outstanding bass and drum dialog.

This is album is a real treat, it's accessible, melodic, energetic and demanding enough to keep you listening over and over again. This is my first five star rating.

that's IRABAGON for you :)

Indeed it is, thanks.