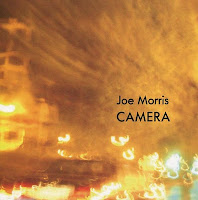 Over the past few months i've become acquainted with guitarist and bassist Joe Morris' work. I recently reviewed his release 'Creatures' with percussionist Luther Gray and thought very highly of it. On 'Camera', to which I'm admittedly coming to a bit late (it was released this past fall) the same duo is joined by violinist Katt Hernandez and cellist Junko Fujiwara Simons in creating some very abstract and captivating explorations.

Like previous album, Morris tends to play meandering single note lines that follow an internal logic rather than a more traditional approach to guitar. His melodic tendrils wrap around and climb throughout the percussion and stalks of support that Hernandez and Simons provide. While his lines may sometimes bunch up as he moves about the songs, his clean clear insistent tone is always in motion and moving the music forward.

To me, the album title 'Camera' suggests snapshots of moments, but moments in ever changing motion. As I listen, images crystalize, and I get the sense of autumnally bare trees in forest thickets, silhouettes and shapes faintly visible, each passing frame revealing more (and sometimes less). In these scenes, the musicians are each are on their own path. They often catch glimpses of each other and sometimes meet as they move ever forward. They are always keeping track of each other, and Gray keeps watch over all. His percussion at times swings, keeps time, and often provides good conversation with the others. At times, like on the mid-album 'Angle of Incidence', all four musicians come together as a cohesive and affecting unit before spinning off again in their own directions.

This too is an interesting assortment of instruments. The cello comes closest to providing a bass tone, but it doesn't function as such. Rather, Simons will provide slashing chords or frenetic runs in the mid and upper registers. The violin accentuates, bringing details into sharp relief and making everything just a little more interesting. Hernandez's unaccompanied solo in 'Street Scene' is an inspired fury of double stops and jarring syncopations. Similarly, Simons long introductory solo on 'Patterns on Faces' is a captivating co-creation with Gray.

There are no conventional song structures, but rather tangentially connected and often sympathetic assortments of individual and groups solos. The album begins suddenly and from the moment 'the needle drops', the musicians are off and exploring. To drive my earlier metaphor just a little further into the ground, there seems to be only a fragment of a map that they are working with, a general direction that they are heading, but each movement is purposeful and moves the music forward.

'Camera' is a really interesting and suggestive album, one that I'm enjoying more each time I listen.
Stef on Sunday, March 13, 2011
Share

I really liked the way you described the music using nature-based metaphors.

Thanks for the comment. It's a real interesting recording ... I listened to it while taking a hike.

the real talent doesn't need any hype of fame and abnormal activities. I prefer this one to top. Thanks for sharing cool stuff and information.