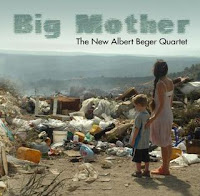 At the occasion of Earth Day, April 22, 2011, saxophonist Albert Beger shares his CD "Big Mother", dedicated to mother earth, for free with everyone.

I reviewed the album in 2008 when it was originally released.  I have listened to the album again in the past few days. When the album was released, I said his playing was influenced by both Coltrane and Ayler, with Dewey Redman coming to mind once in a while. Now, three years later, I hear a strong similarity to the pre-commercial Gato Barbieri, the Argentinian who could be very deep and passionate and expansive, an emotional "screamer" - in the positive sense : building his quite accessible soloing, starting deep in his guts to soaring climaxes of high overblowing.

A great initiative by a great musician.