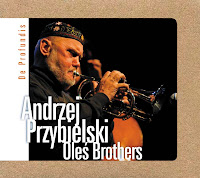 One of the key figures of Polish free jazz, "Major" Andrzej Przybielski passed away on February 9 of this year, after a long musical career that started with free jazz in the 60s. This is the third trio album with the magnificent rhythm section of the brothers Marcin Oleś on bass and Bartłomiej Brat Oleś on drums. The trio was planning a new studio album to be recorded later this year. Now, instead they released this live performance that took place  in Bydgoszcz, Poland on 26th April 2010, or almost exactly a year ago.

The album starts with Mongo Santamaria's Afroblue, best known from Coltrane's performances, with Przybielski starting solo with muted playing, from the start setting the tone of deep emotion, rhythm and musical freedom, three elements that will stay in high doses throughout the performance.

As with the trio's previous albums, the quality of the three players is such that they keep the listener mesmerized from beginning to end, with lots of sudden tempo and rhythm changes, breakneck speed climaxes as well as deep soul, joy and intense expressivity. As I've mentioned before, the Oleś brothers are just by themselves worth listening to, and they get ample time to demonstrate their solo and duet skills, yet the trio's virtuose interaction, and the incredible and soulful presence of Przybielski makes this a highly recommended album.

The absolute highlight is the trio improvisation "De Profundis", the title track, because it shows again how focused improvisation without formal restraints can lead to superb creativity in the hands of great artists.

The album ends with a few words in Polish by the trumpeter, and an enthusiastic applause ... a sad farewell.