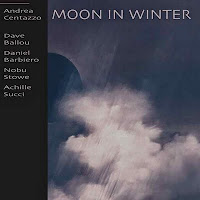 Italian percussionist Andrea Centazzo can be rightly called an innovator, someone who manages to create his own compositional voice, recognizable yet elusive at the same time, bringing a synthesis of many musical genres, ranging from classical, folk, to jazz, world music, new music and one could even say new age. The end result is often evocative, cinematic in its sweeping story-telling, its drama and expansiveness. Centazzo loves effects - unexpected rumblings, hard hits, gongs, sudden tonal or textural changes -  as much as he likes broad canvases and refined sensitivities. He abhors noise but also sweetness : anger and sentimentality seem to be alien to him.

On this excellent album, he is accompanied by Nobu Stowe, the Baltimore pianist who invited him for this performance, and by Dave Ballou on trumpet, Achille Succi on alto sax, clarinets and shakuhachi, Daniel Barbiero on bass. Yet this is not a quintet.in the true sense: the musicians play the music in shifting line-ups: duos, trios, quartets, given the music a relatively low density and ephemeral feel with the exception of "Moon in Winter III", the fifth track in which the quintet plays jazz in full force, before you are taken by surprise again.

The ten pieces are composed with room for improvisation, and then mixed afterwards. On some tracks strings are heard, but not credited.

As can be expected, the band creates a welcoming yet unpredictable musical universe, a kind of dreamworld, where things happen that are beyond logic or linear evolution, where familiar things meet on unfamiliar grounds, where incompatible things match, without turning into a nightmare, but far away from reality too.

You will not be shocked, you will not weep. You will float in a land of wonder.