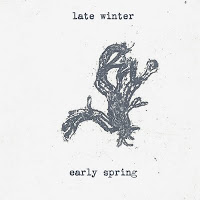 French bassist Bruno Duplant (here also on small percussion) and Portuguese clarinetist Paulo Chagas have found a soulmate in Canadian gu-zheng player David Sait, for a further exploration of minimalist yet expressive sound sculptures. The music on the two long tracks is inspired by the catastrophic events in Japan during winter and spring of this year, and the sound of the music is very much influenced by traditional Japanese music.

I quote from a website that knows more on the subject to give a feeling of the approach :

"The job of the artist is to suggest the essence, the eternal qualities of the object, which is in itself a work of natural art before the artist arrives on the scene. In order to achieve this, the artist must fully understand the inner nature of the aesthetic object, its Buddha nature. This is the hard part. Technique, though important, is useless without it; and the actual execution of the art work may be startlingly spontaneous, once the artist has comprehended the essence of his subject."  and also "the essence of the sounds of nature suggested by the least possible means. Or, in further abstracted form: the essence of sound itself suggested by the least possible means" (From Zen Buddhism & The Arts)

Even if this Zen approach to music characterises the music on this album quite well, it still has a kind of Western modern sense of evocation, drama and tension that does not diminish but adds to the aesthetic, making listening to the music extremely compelling and captivating. Despite its minimalism, some parts are heart-rending and terrifyingly dark, especially towards the end of "Early Spring". If Zen music starts by evoking the nature of the things itself, this trio equally tries to express their personal emotions in the process. Just listen at the distress in "Late Winter" to understand what I'm trying to say.

A trio that captures the essence of music.