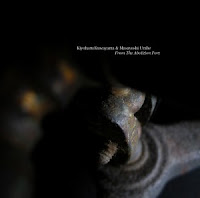 The album consists of one fifty-minute long free improvisation and sound exploration, and the result is an absolutely staggering illustration of how it is possible to create a musical universe with very sparse means, yet one that is full of tension, meaning, and feeling. The tension, the meaning and the feeling are not necessarily those you like to have, but like all good stories, that's what creates the suspense and keeps you seated to your chair in anxious expectation of what is coming next, hoping for relief, hoping for salvation, hoping ...

This universe resonates within the confines of a huge empty port warehouse in Nagoya, Japan, and the "space acts as a third instrument" we learn from the liner notes, and that's well put.

The music itself is as far from spiritual music as possible : it is harsh, cold, industrial, hair-raising at moments, with whip-lashes of sound in between, sudden violent screams, sad howling, ... with the musicians like lone adventurers in a dark and empty space, losing track of each other, lamenting their fate, suddenly totally alone and screaming out for solace and comfort and the presence of something warm, which is mostly denied, even if Masayoshi suddenly plays some beautiful sensitive phrases around the middle of the piece. You sometimes even doubt whether the two musicians are on the same journey, or whether they are the two last survivors of something terrible, doomed to eternal conflict and battle between the two to them.

The true mastery of both artists resides not only in the coherence of their vision, or their incredible expressivity, but also in the controlled pace that creates one of the most dramatic musical performances I've heard in a long time.

If you are not easily scared, then you should really look for this album (here), even if only 100 copies were made. It will crush you. It is devastatingly beautiful.