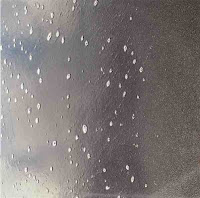 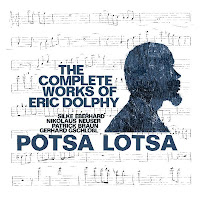 Pögiff by Birgit Ulher, Tim Perkis and Gino Robair gets my support by in large for the severity of swerve away from the land of melody and tertial harmony. And yet, the music has shape, contour and functions like any other music. If the need for union with the familiar can be surrendered moderate to occasionally rich (though never garish) rewards await..

I first became aware of Tim Perkis' music in the mid 90's in Portland Oregon at an equally non-diatonic performance with Portland's own (and eminently non-diatonic) Doug Theriault. My memories of that was of
Perkis using an interface that had nothing to do with any “musical instrument” I've ever seen and yet Perkis was entirely musical and functional through out the entire performance. Bringing out a broken Speak-and-Spell and letting it run amok as “art piece” is one thing, integrating with other musicians playing what we have come to know as “musical instruments” is another.

That said, there were times through the recording when I had difficult telling Perkis apart from Robair--though to be sure, there is a difference. The extent to which they cannot be told apart is a compliment, and shows the range and breadth of Robair's percussive concept.

As is often the case in improvised music with synthesizers, the more Uhler plays the trumpet as trumpet, the less compelling she is. Her palette of “other” trumpet sounds is broad enough that there are long passages where Uhler integrates seamlessly with the electronica surrounding her.

The ultimate joy of Pögiff is that it represents a happening in sound that simply could never happen again. It would be interesting to hear the group try. They could get close using they could using the same sounds and techniques. The irony is that the computer adds an element of non-repeatability that traditional instruments cannot match.

Potsa Lotsa for example is a work that theoretically could be played again and again with large parts of it sounding the same as the night before. The solos would be different, but the compositions and arrangements are static and unchanging. Or could be.

Therein lay the real utility and value of Potsa Lotsa—it is a reminder of what we treasure in Eric Dolphy by delivering the opposite. We treasure Dolphy's total sui generis brilliance, dynamic movement through chord changes and heroic interaction with the some of greatest rhythm sections music will ever know. Potsa Lotsa
gives us horn arrangements approximating the excitement, but never quite achieving it in the same way MRI scans don't say anything about the patients personality.

The tremendous musicianship of Silke Eberhard (alto saxophone) Patrick Braun (tenor saxophone) Nikolaus Neuser (trumpet) and Gerhard Gschlossl (trombone) on Potsa Lotsa (and tremendous it is) combined with the epic amount of labor necessary to transcribe and arrange the parts, rehearse and perform them has the weight of a PhD dissertation yet is never as heavy as the real thing.

It does take guts to tackle a project of that size and an admirable amount of devotion to pull it off. If in the end Potsa Lotsa is the Rosetta stone that introduces the future to the eternal genius of Eric Dolphy, the effort was worth it.