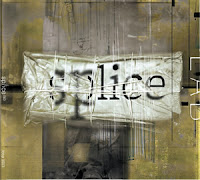 It seems that jazz and more open ended forms of music are alive and well in the UK, or at least that's the impression I get form a recent glut of albums I've been listening to. Here's another excellent release from the Loop Collective label featuring this fine group known as 'Splice'. If you follow the UK jazz scene the names of Fincker, Bonney and Smith need no introduction, however Pierre Alexandre Tremblay was a new name to me, and a nice discovery. It's probably his inclusion in the group which adds an interesting slant to the music as Pierre Tremblay works at the Huddersfield University teaching and composing in the field of Electro-Acoustics along with the likes of EA guru Monty Adkins. Many such groups have musicians that tweak electronics whereas in this band the electro-acoustic element is really fine tuned, skilfully used and subtle.

The music ranges from what I imagine are improvised workouts to fully composed pieces. The mournful melodies combined with the subtle use of electro-acoustic manipulations result in a very dark ambience, in fact the BBC commented on a live concert saying 'if you like your music dark and dense' - exactly! Here small details are taken from the trumpet or the sax are re-used in pieces to produce ambient sounds which are maybe interrupted by a single drum beat or a clarinet that bursts through from somewhere beyond. Tunes such as Tk 2 (Cortège) are slow and heavy with a sax that cries out before gradually playing a delicate melody over blistering drums and distorted bass. Tk 3 (The Wanderer) makes great use of clarinet and trumpet playing a melody which seems to repeat itself (but not exactly) and could be something from Miles Davis Big Fun. The group seems to have almost done away with direct soloing, successfully combining improvisation, composition and electro-acoustics into well balanced musical style, giving no aspect of the music more or less room. Tk 8 (Sillon Fermé) is a typical example with manipulated bass sounds turning non stop in a loop. Is anybody really playing, or is the whole thing electro acoustic manipulation?

It's not a perfect record but it has many strong points and one wonders where they will move next with this idea, in fact it's a little like a card player who never really shows their hand. Splice is not so much a genre buster, but more of a genre consolidator and will probably appeal to those who like the work of 'Food', Jim Black's 'AlasNoAxis' or Chris Speed's 'Yeh No' Ensemble. However, this being a British band (and production) the music is in fact much rawer in feeling and whilst also being sophisticated it's capable of giving your speakers a run for their money - play loud!